4.8
5 verified reviews
Get a Quote

Since 1977, A All City Hauling Unlimited has been providing exceptional services to Denver, CO and surrounding communities. Our specialties include waste hauling services, like trash, yard debris, furniture, appliances, and more. We also offer recycling services, cleaning, and more. As a fully bonded and insured company, you can trust that our team will respect your property and keep it looking beautiful.

A All-City HaulingWrite a Review
5.0
Review by Name Withheld in Aurora, CO

I had an old grill, a couple bikes, and some boxes that I needed to get rid of, so I called several junk removal companies in my area to get quotes. A All-City Hauling returned my inquiry immediately. I appreciated their responsiveness and reasonable pricing so it was an easy decision to hire them for the job. The guys that came to haul away my stuff were professional and very efficient at what they do and I would use them again if the need ever arises.

We have used A All-City Hauling for junk removal in the past and have always been highly satisfied with their services. The most recent job we hired them for was to dispose of some copper and tires which filled up about a quarter of the truck. They did a great job, as usual, and we will continue to hire them for our junk removal needs.

I have used A All-City Hauling s junk removal services on three different occasions, and every time I am very satisfied. I found them on the internet and saw that they had an overall 5 star rating, so I called and got a quote from them and several other companies in my area. Not only is A All-City Hauling the most affordable junk removal service I ve spoken with, they also come prepared to get the job done efficiently. I will be using their services again in the future.

We were getting rid of some household debris and needed a dumpster. We inquired with several companies, but we wanted to have it sooner than later, so we ended up using A All-City Hauling. They offered the most reasonable price for their dumpster, and we were satisfied with their timely services.

I had an old mattress removed by A All City Hauling, and it was a great experience working with them. They arrived at my home as scheduled, and they hauled the mattress out swiftly. They were very competent and friendly fellows, and the price was good. I will surely use them again. 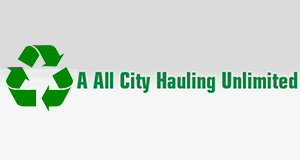