Aaron's Roll Off Service is open 6 days a week. We provide professional dumpster rental service at a price you can afford. At Aaron's, there is nothing up our sleeve, no magic or tricks of the trade. We believe in simple, quality, reliable service that you can trust.We are locally owned and operated and we always have your budget in mind. Aaron's is committed to safety and excellence. Call today!

I m a contractor that rents dumpsters from Aaron s Roll Off Service regularly. They deliver on their promises, from pick up and delivery times to offering the best prices, their service can t be beat. Because I m a contractor, my rate is slightly lower than a homeowner s, but even at the homeowner s rate, their price point can t be beat in the area. They ve always outbid all of the big corporations like Waste Management and U.S.A. Waste. I am happy to have them in the area and will continue to use them for our company s projects.

5.0
Review by Emile B. in Northampton, MA

I needed to empty my parents basement and wanted a dumpster to be delivered to the property and picked up once done. Aaron s Roll Off Service was extremely easy to deal with. I made a call, set up a time for drop-off, and it was delivered as promised. I called him when it was ready for retrieval, and an hour later, it was picked up. There is plenty more to jettison, and I look forward to dealing with Aaron s again when that time presents itself.

They were great, absolutely perfect. They thoroughly explained the pricing and were prompt with the delivery and pick-up time. Would definitely use again!

I got a 10 yard dumpster from Aaron’s Roll Off when I did a house cleanup project. They were wonderful. I called them up, and they told me they could deliver it to me that same day, which they did. I had no issues with it during the 8 days I had it. They told me to call them when I was done with it, and they picked it up right away. Their service was good, and I would definitely use them again.

I did a roofing project and needed a 15 yard box for the debris. We got it from Aaron s Roll Off. All we had was good service. They delivered it on time and we had it for 2 weeks. We ll definitely use them again. It was a wonderful experience and I d like people to try out their service.

We were doing a major house cleaning while preparing to move. We rented a dumpster for the trash. Aaron s Roll Off Services was chosen and they delivered the dumpster on time and all of that went fine. Where I ran into problems was after it was picked up. My credit card was charged an additional $150 with out my knowledge and when I contacted them they told me it was because of some items that were put in the dumpster that shouldn t of been. I was never told what could not go in there. I was very disappointed in the way that they handled the situation. At the very least I should of been notified before having my card charged. 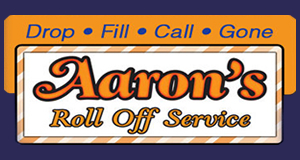