Affordable Roll Off ContainerWrite a Review
4.0
Review by Name Withheld in Wellesley, MA

We rented a 20 cubic yard dumpster for a construction project. Affordable Roll Off came on time and did a nice job. They picked it up timely when we were done with it. They did a fine job and I would definitely use them again if I needed to.

I did a roofing project and needed a 25 yard dumpster for the resulting debris. Affordable Roll Off provided excellent service, and I have no complaints with it. However, I had an issue with the billing, specifically overages. I know I was allowed 4 tons for the dumpster and anything above that was charged at $125 per ton. When the bill came, the overage was at 1.1 tons, but they charged me for 2 tons instead of adjusting it to the accurate weight. It was a bit annoying that I had to discuss it with them but in the end they gave me a credit for the next dumpster I m renting from them. They were accommodating in the end, but it was just a hassle going back and forth with them regarding this issue.

Affordable Roll Off provided us a 15 yard box for some junk and trash we needed gone. Their price was comparable to the other companies around our area, and they may have been the most reasonable. I would definitely use their service again.

I needed a 15 yard dumpster for a deck refinishing and for the resulting debris after I cleaned out the house. Affordable Dumpsters dropped off the container at the agreed upon date/time, and their service was good from top to bottom. I was very pleased with them. Good Job!

Far from affordable!!!! Explained my job (demo outside brick stairs) to them, but when the dumpster was taken away and weighed we got hit with a $1,000+ overweight charge. In addition, we were given 5 DAYS to pay it. That s ridiculous/Unreasonable...call it what you will. Not sure how I was expected to know how much it weighed. The container was not overfilled. Company was not willing to work with us on the issue. Never using them again, and I suggest you look elsewhere for a dumpster rental. Probably better off just going to local dump.

I obtained a 20 yard roll-off to throw out some household debris and trash. I went ahead and got the dumpster from Affordable Roll Off. All I can say is that they were great, and I give them an excellent rating.

I got a 15 yd. roll-off from Affordable Roll Off to dispose of some remodeling materials. They were on time, which was nice, and we were able to keep the bin for 7 days. I don t have any complaints -- they were fast and friendly. They did a very nice job.

I rented a 15 yard from Affordable Roll Off for some construction debris. I ended up keeping the dumpster for 7 days and the process was smooth. They were on time as promised. 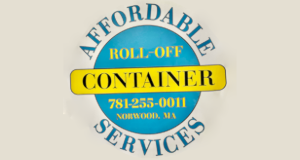