The mission at Bolt Scavenger is provide our customers with the service they deserve. Our drivers are always polite, professional and prompt. We are known for our lightening fast service, courteous staff and flexible monthly billing.

Each dumpster goes straight to our transfer station to be sorted for recycling. We work hard to keep our cities and America clean.

I cleaned up my house and needed a 10 yard dumpster to haul away old furniture and other junk. Bolt Scavenger provided us with the one we needed and dropped it off as scheduled. They placed it where we wanted it placed, and I have nothing to complain about. I had it for 2 days, and they picked it up after I notified them. Everything about their service was fine, and I would recommend them to people I know.

I m a contractor, and I use a lot of dumpsters for my projects. For this particular project, I needed a 20 yard container to haul away broken down materials, like sheet rock and wood, and chose Bolt Scavenger Service. The only issue I had with them was that they only allow short-term rentals. I use these dumpsters a lot, and most of the time for longer periods. I understand that they have a limited number of dumpsters that they rent out, but a rental period that runs for 21 to 30 days would fit my project time frames better. If they start offering the option to extend rental periods, I will use them again. Other than that, they did a good job, and I would recommend them for short-term rentals.

We needed a dumpster to clean out old junk that had been building up for a few years. Bolt Scavenger delivered a 10 yard dumpster which we had for 4 days. They were very helpful and kind. The experience went very well so we were very satisfied with them.

I called up Bolt for a 10 yard dumpster, which I just needed for the day, and they delivered it around an hour after my call. They put the dumpster exactly where I wanted it, which was good. When I was done, I called them to pick it up and they came within an hour. Their service was really, really fast.

We were redoing an old building and had some bricks and mortar to dispose of. We had to work in sections, so we needed a 40-yard dumpster there for at least a month. Bolt Scavenger didn t have the size container that we needed so they rented out a 10-yarder to us. They had some problems with permits, though, so they said they needed to pick up the unit after a week. They even told me that if I wanted to keep it longer, I had to pay more. I rented three consecutive times from them, but then they picked up the last one without informing me, so I stopped working with Bolt. I wasn t happy. 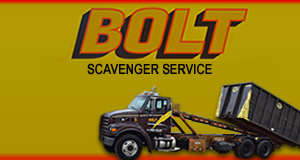