Come and Take It

4.6
5 verified reviews
Get a Quote

Come and Take It is committed to a green recycling approach to waste management. We offer 20 - 40 yard dumpster rentals for most non-hazardous materials. We provide the best possible roll off service, which means we are always friendly, polite and prompt with pick up and delivery.

Come and Take It delivered a 30 yard dumpster to us right on schedule. We kept it for a week and loaded it with demolition debris from a garage we took down. Communication was good with these guys, and there were no problems.

I rented a 20 yarder from Come and Take It. I had for three days. I went through the website, but the integration wasn t really there, so I had to call the company directly. They did deliver, on time, and everything went fine.

We rented two 40-yard dumpsters and one 20-yard dumpster from Come and Take It over the course of two months. We were happy with their service. The only issue was that they did not come and pick up the dumpsters in a timely manner. It was probably because we were quite far from them and they had to fit us into their schedule, so it wasn t a huge deal.

We were cleaning out our garage and ended up with a lot of papers to dispose of. We rented out a 40-yard dumpster from Come and Take It. My husband said the dumpster seemed smaller though, probably a 30-yard, but we weren t sure. Anyway, the guys came on time and picked up the dumpster again the very next day. There was no problem whatsoever, so I would recommend them to others.

We cleaned up our land and removed a lot of trees, so we needed a couple of containers for the wood from that, and also for some old pallets. Come and Take It provided us with a 40-yard dumpster for seven days. We needed another one after that, but they only had a 30-yard dumpster available at that time, so we rented that out instead, for another seven days. Communication with them wasn t clear; they told me we would have it by Friday, but when I called again, he said he put me down for Tuesday. After that, I called to ask for another dumpster to replace the full one that we had, and they were also late in bringing-in the replacement. It didn t really affect us and, other than that, everything went fine. 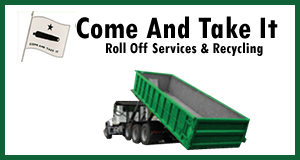