Freeman's Junk Removal has over 20 years of experience in debris and rubbish removal. We want to save you time, money and effort.  When you call Freeman's over renting a dumpster, you pay less and receive same day service. We serve residential and commercial clients with home and business cleanouts, construction debris and yard waste removal.

We believe that no one can do it better than us! We are true professionals when it comes to full

Freeman's Junk Removal has over 20 years of experience in debris and rubbish removal. We want to save you time, money and effort.  When you call Freeman's over renting a dumpster, you pay less and receive same day service. We serve residential and commercial clients with home and business cleanouts, construction debris and yard waste removal.

We believe that no one can do it better than us! We are true professionals when it comes to full service junk removal. We think green and donate and recycle responsibly.

Mr. Freeman Allen and Doug arrived on time, were friendly and polite, and quickly assessed the removal of an old hot tub. The gentlemen were finished in 1-1/2 hours and the area is now void of the hot tub and the area and street swept clean. I will definitely be referring friends when they are in need of hauling. Thank you Mr. Allen and Doug! Overall experience was a pleasure. Both men were professional and friendly and worked nonstop. Price was very reasonable.

Freeman s Junk Removal did a really great job removing my old air conditioner and old fiber board. They removed it fast and with no problem. Everything went perfectly fine. They offered me a good price and excellent services.

My husband recently passed away and we needed to get rid of some furniture around the house. My daughter recommended Freeman s Junk Removal since I didn t know any junk haulers in the area or had much experience with junk hauling. The guys were prompt and very accommodating, though they were a bit pricey for my expectation. Overall, it was a smooth and pleasant experience from Freeman s.

Mr. Freeman of Freeman s Junk Removal was a real life saver. He removed two recliners and an old TV that we had been trying to get rid of for a year. He was quick and efficient, and we are very pleased.

I was trying to get rid of some old mattresses and called several junk haulers. Freeman s was the only company who was willing to do the job and come out to my area. They didn t charge extra and I really appreciated that since I wanted to get rid of the mattresses as soon as possible. They hauled it with no problem and were very pleasant to work with.

Freeman s Junk Removal was very pleasant to work with. They came right on time and they went above and beyond to help me remove a refrigerator, double vanity, carpeting, and three old TVs. I was very happy with the work they did and would highly recommend them.

They arrived on time, removed the items quickly and efficiently, and I could not be more pleased with their services. We plan to use Freeman s Junk Removal again in the near future for other item removals.

Freeman s Junk Removal made it a pleasant experience to work with them. Their attitude helped a great deal, as they were patient and willing to work. The two guys removed everything that I wanted cleaned up after themselves. I will call again and recommend them to my friends. I am very pleased with the job they did.

I was moving and downsizing, so I needed a dumpster to get rid of the stuff I wouldn t be moving with me. Freeman s Junk Removal arrived on time with the dumpster I needed. They were friendly, polite, and hard working. I would recommend them to anyone who needs to remove stuff from their home.

I needed to haul away an old mattress, an old nightstand, a couple of old bookcases, a dresser around 5 ft. long, and some other stuff. Freeman s Junk Removal did the job for me. They were on time and moved the items to their truck very efficiently. They did really well, and I would recommend their service.

After relocating from Albuquerque, NM, we had a garage full of packing material, cardboard boxes, wrapping paper, bubble wrap, etc. We needed someone to come remove it as we had no way to dispose of it ourselves. Freeman’s Junk Removal was professional, polite, and on time to come to our home and give us an estimate to remove. From there, we agreed on a date and time to have the work completed. He showed up on the agreed upon date and on time. During the job, he was fast, cleaned up well, and even removed a few extra items that my wife asked him to. He was great, and I would recommend his service to anyone. We will be calling him again for another job soon.

I moved and had some leftover boxes (around 50) and needed to have them hauled away. Freeman s Junk Removal did the job for me. They came on time and picked up all the items I wanted gone. I included some other junk and old mattresses, and they took it with them. I was satisfied with the service and would surely use them again. They did a terrific job.

Freeman’s removed a big television from my house. The two gentlemen showed up on time, and they were very nice and polite. They took the item and hauled it to their truck. I have no complaints whatsoever—they did a really good job.

I was impressed with the courteous service. Mr Freeman called in advance of the pickup. The work was done safely and in spite of inclement weather. I would recommend Freeman Junk Removal to anyone wanting to dispose of large household furniture items.

Freeman s Junk Removal did the removal for me. They came and took the refrigerator that had easy access from my garage. They hauled it away and load it on their truck. It was all good.

Freeman s Junk Removal was hired to remove a 6-person hot tub from the backyard. They went in our backyard, moved the hot tub to the front of the house, loaded it up and then cleaned up after themselves. They did a great job and I do recommend their service.

I needed a bunch of items hauled away from the house like a small refrigerator, a water heater, a car transmission, a tool box with small tools in it and trash. Freeman s Junk Removal did the job for me. They were prompt. Came in and took the stuff I wanted removed and cleaned up after. I was very happy because they did what they were suppose to do. I will recommend their service to others.

I contracted Freeman s Junk Removal to take away a truckload of yard waste from the garage of our house in St Louis, MO. They did a good job and I would recommend them to friends.

Freeman s did a debris cleanup for us. We chose them because they were the only one who had the availability to do the service. They showed up on time and got right to work. The crew took everything we needed removed from the backyard and made sure that they didn t leave any mess behind. Their prices are definitely reasonable and a bit less than other companies. I was satisfied with them.

I had quite a bit of junk in the garage and a double bed in my bedroom that I wanted to be taken out. I was very happy and pleased with Freeman s. He seemed like a good guy. They got everything out in a half an hour!

The garage was half full of empty cardboard boxes along with a mobile scooter and some other junk. Inside the house was a HUGE over stuffed chair and a double bed with box springs and mattress. They arrived and introduced themselves then went straight to work. All I had to do was unlock the door to the garage and open the garage door. They were courteous and professional. They were in an out in less than an hour. I would recommend them to everyone.

We had general household junk stored in our 10x10ft shed that we wanted to throw out. The guys that came out from Freeman were great. The phone skills lacked slightly but we would hire them again regardless. They did a good job.

My mom had to throw out four old 5 x 4 ft doors from sheds, several smaller pieces of old paneling, a broken lawn chair, and several containers of heavy trash cans. I called Freeman s and he came out and got everything from the backyard in one trip. I can t remember the exact price that we paid, but my mom says it was worth what she paid. They did everything wonderfully and we were very happy.

We requested furniture removal from Freeman s for a home clean up. There was a king-size box spring, mattress, dresser, chest, and night stand. Service was great. I give them top scores for everything.

We hired Freeman s for some basement junk we wanted cleaned out. I got in touch with Freeman s through the website and they did exactly what I had asked. They had to go up and down some stairs to get to the junk in the basement, but there was no furniture or anything heavy to haul away.

We have a tandem garage, so it was on the same level as the basement, which is where the items were. The guy from Freeman s just had to take the items out through the garage and onto his truck. He did great and I plan on using them again.

We have used Freeman s three times in the past to remove clothing, mattresses and box springs and some other old stuff. I love them! I called the BBB before hiring them and they checked out great there too. He always came when he said he would, and he even calls beforehand. I can t help but be controlling, and most people will tell me to leave them alone and let them do their job, but they were so nice about it. If I ever have to call for more hauling it s definitely going to be with them.

There were around 200 decorative stones surrounding an old garden at my property that I wanted gone. I already had them removed and stacked up in the driveway. I hired Freeman s to come pick it all up and haul it away. I was very happy with them. They showed up quickly and loaded up the stones fast.

We asked Freeman s to haul away some kitchen and bathroom renovation junk. The guy who showed up was quite friendly and was there before we got to the place. Everything was at the back and he did the job real fast. He was good, and the company was good as well.

I had to clean the basement and garage and get rid of all the junk. It was a big job, so I outsourced the work to Freeman s Junk Removal. The crew arrived on schedule and followed directions very well. They also floor swept the place afterwards. 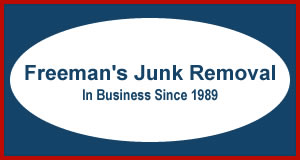