Gone for Good believes in reducing, reselling and recycling. We are committed to doing what's right for our customers and the environment. We are a full service junk and debris removal company that focuses on professionalism, customer service and recycling. Say goodbye to that old junk forever while also reducing your carbon footprint! 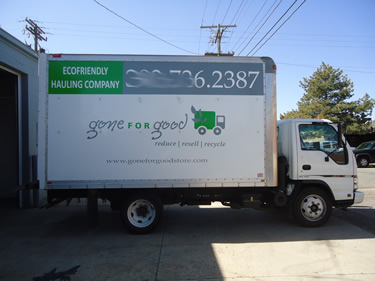 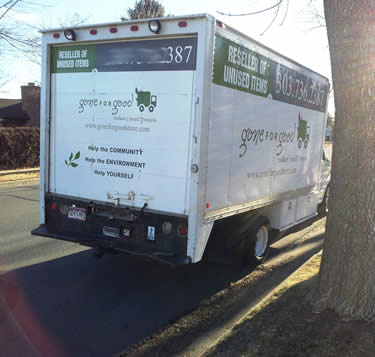 Gone for GoodWrite a Review
5.0
Review by Richelle M in Westminster, CO

My husband and I have nothing but great things to say about Gone for Good. As a realtor and a contractor, we were desperate to find a junk removal service that could get the job done. We struck gold when we discovered Gone for Good, as they exceed our expectations every single time we used them. Their consistent and reliable service has had a positive impact on our lives by knowing that junk removal is no longer a problem for us. Their crew is courteous and helpful, and their fees are very reasonable. We have already referred Gone for Good to a friend who ended up using their services and had the same quality experience that we have. I will continue to hire them and let my clients, and others in the industry, know how highly recommended they are.

I needed to remove a tanning bed from a storage unit so I had Gone for Good do the job for me. They were fantastic. When I called to book the appointment, their customer service was very accommodating and so are their workers. They helped me save a lot of money by not having to keep the tanning bed in storage any longer. I ll definitely hire them again.

We were doing a clean out and had about a quarter of a truck’s worth of trash to throw out. There was a large chair, recyclable papers, and other household junk. Gone For Good did a good job. It was a fairly easy haul, but I was satisfied with their service.

4 old tube TVs are finally out of here! The junk removal was done by Gone for Good. I think they did a fantastic job. They came out, loaded up our old school TV sets and that was it.

I had some misc household items that I needed to be hauled off. Gone for Good actually did a good job. Though a bit expensive, I still think they re worth the price.

I needed to haul away an old cabinet, a few bags and drywall. This project was some time ago, but from what I remember, they were quick to respond and they were able to get the job done without any incidents.

I needed to get rid of a couch. It has been a while already since I had this project but from what I remember, the guys from Gone for Good were able to do their jobs properly and in a timely manner. Everything went well with the pick up. I would ve remembered if I had any issues with them, but I had no complaints whatsoever.

I needed to haul away some furniture and a bit of trash. I had this project a few months back already but I m pretty sure everything went smoothly with Gone for Good. I don t recall exactly how much they charged me for it but I m sure it was very reasonable.

I needed someone to haul away some plastic toys, a Christmas tree and a large bag. Those guys who came here from Gone for Good were nice and friendly and they were able to pick everything up quickly and without any incident.

I needed to haul away about 1400 sq ft carpet, 2 mattresses and box spring, a dresser, lots of wood and other random junk. Gone for Good did fine. They took everything that they were supposed to, they were polite and respected our instructions and they also charged us reasonably.

I had an upright piano ready for pick up as well as a few more miscellaneous items. Gone for Good was amazing. They came here right on time and they did a very thorough job cleaning everything up. They also charged very reasonably considering I had a few additional stuff thrown in the haul. All in all, I was very satisfied.

I m a real estate broker, so I need to hire contractors regularly to haul away leftover stuff from houses that I sell. Gone for Good always does a fabulous job. They come on time, are professional, and do everything they re asked to and more. I ve used them twice recently and have recommended them numerous times.

I had a refrigerator, cabinet, and an armoire that I needed to dispose of. Gone for Good did a great job. Service was excellent.

We had a lot of furniture to be hauled away - a dining room hutch, a big office furniture piece, a bookcase, a couple of chairs, a couch, and several boxes of miscellaneous items. Gone for Good did a good job. They came on time, were polite, and cleaned up afterwards. They even gave us credit for some of our items which they were able to sell on eBay.

I had a lot of brush that I needed to dispose of. I couldn t be there at the time of the hauling, so I was handling everything remotely. Also, there was more debris than I had previously calculated, but we renegotiated a resolution to that rather swiftly. They cleaned it all up, took care of everything, and even sent me a photograph to show that the whole truck was filled up with brush. Gone for Good did a good job.

We were moving into a smaller place and had a bunch of stuff that we did not want to take with us such as, a couple of old TVs, a couple of beaten up strollers, lamps, fans, mini blinds, dressers, and other small items. It took up one dumpster load. Gone for Good was the company we ended up going with and they did a great job. Had everything loaded up quickly and safely. Everything was pretty scattered about but, there was no complaints they just did their job.

I was getting rid of junk, which included an ottoman, couple of 70s day beds - no frames, box springs, and rolled up carpet. I was very happy with Gone for Good.

I needed some lumber from an old deck removed. I am very satisfied with Gone for Good. They showed up on time, was respectful, and it was good service all the way around.

We had old furniture that we didn t want anymore, including a bed, big tv, and some chairs. Gone for Good was pleasant and they did a good job.

We had a couch and love seat to be hauled away. The junk removal people had to go up a flight of stairs to get the couch while the love seat was in the basement. Gone For Good were terrific. It was a pleasure working with them and I will recommend them to others.

We had an old 42 inch Rear-projection TV with a base sitting around that we wanted to be taken away. The job only took around 10 minutes. Gone For Good did a great job. We called them and they came out when they were supposed to. They also gave us a better price.

5.0
Review by Jennifer in Henderson, CO

We had a bunch of trash that needed to be hauled away. It was stuff like boxes, small items and old books. We hired Gone For Good to pick it up. I would say that they did a very good job. Very nice people and very helpful. I would recommend their services to others.

We needed an old refrigerator hauled away from our basement and a couple other pieces of junk. The junk removal company who did the hauling for us was Gone for Good. They did a great job and did it fast. I have no complaints.

We were getting rid of building materials, old doors and some old furniture. It was a rental house and we had to clean out a bunch of stuff. We were happy as could be with Gone for Good. We had a great experience and it was the easiest thing I ve ever done and I wish we had it in Texas.

I needed some furniture pulled out of my mother s house. It was a couch, 2 chairs, 2 ottoman, and picture tube about 27 inch TV in the living room. They were incredibly polite, very prompt and it was a really good service. They were in and out in a few minutes, they didn t cause us any problems and everything was clean.

I did a kitchen remodel and had some construction debris and other stuff that needed to be removed. Gone for Good was the company we hired to take care of it. I like the fact that they take things that are recyclable to Habitat for Humanity, that s one of the reasons that I keep calling them.

I had a physician who had office stuff that needed to be removed, such as metal chart racks, copier, refrigerator, chairs, books and other office supplies that were in a storage room. Gone for Good did a really good job. The 2 workers that came out were a father and son, and they got the job done really quickly. They even swept up the floor and really cleaned up the storage room after they left. They ended up having to make a second trip, which we didn t anticipate in the beginning, but they did that same day. They were nice guys who came in and worked hard.

I was cleaning out my house and I had a lot of stuff in my garage that I needed to be removed. Everything was great. They were very professional, came straight in started working got it done and left, just the way I like it. 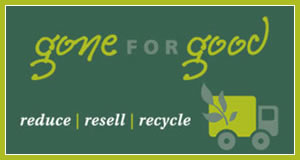