Greenway Dumpsters provides waste removal in a professional and responsible manner. We are dedicated to managing and disposing of your junk, waste, construction and demolition debris.

When working with Greenway Dumpsters you will receive the highest level of service through our 100% committment to your project at hand, timely delivery and pick-up, and superior reliability. Our dumpsters and dumpster rental products are well-maintained and will not damage your property.

While the other guys are busy nickeling

Greenway Dumpsters provides waste removal in a professional and responsible manner. We are dedicated to managing and disposing of your junk, waste, construction and demolition debris.

When working with Greenway Dumpsters you will receive the highest level of service through our 100% committment to your project at hand, timely delivery and pick-up, and superior reliability. Our dumpsters and dumpster rental products are well-maintained and will not damage your property.

While the other guys are busy nickeling and diming you with extra surcharges and fees, Greenway is focused on your satisfaction and working within your budget. We are here to help with any questions from sizes of roll off boxes, prices, and schedule. Call today!

Greenway DumpstersWrite a Review
5.0
Review by Deb P. in Fishers, IN

Greenway Dumpsters staff is very friendly and accommodating. I highly recommend using them and wouldn t hesitate to rent a dumpster from them again.

We cleaned up the timber line next to our new house, and we dug up and sawed up stumps, tree limbs, many heavy vines, and wild bushes. All this material had to be removed from the site, so we rented a 10 yard dumpster from Greenway Dumpsters. Delivery happened when we wanted it, and the driver placed it where we wanted it, too. It was so hot, we could only work about three hours each morning. We finished the project Friday morning. We had the dumpster full. We called Greenway around 1pm for pickup, and they were here at 4pm. They provided good dumpsters that open in the back so that heavy material could be easily loaded. They provided excellent service for a reasonable cost, and we strongly recommend them.

We contacted Greenway Dumpsters when we had a rental property cleaning that was very time sensitive. They adjusted the delivery time to an earlier delivery to accommodate a change in our schedule and were very helpful. If ever I need this service again, Greenway will be the one I call. Christina and Jordan were very helpful.

5.0
Review by Donald S. in Brownsburg, IN

We needed a dumpster to dispose of the old concrete associated with replacing our driveway. It took three 15 cubic yard dumpsters to get the job done. They were delivered in a reasonable time, which eliminated the need to rent a skid another day.

5.0
Review by Jeff H. in Indianapolis, IN

My initial call was disappointing because they didn t have the size I wanted, but after ending the call, they called me back to let me know they just got a return and it was the dumpster size I wanted. I really appreciated that. This was the 5th time I have used this company, and their service is consistently good.

5.0
Review by Joshua W. in Indiana Beach, IN

I ve called Greenway to rent a dumpster for several job locations. They have it dropped off on time every time. I ve used almost every roll off service in Indy and by far, Greenway will be the place I call for the rest of my dumpster needs. They had great prices and great service. When I work with them, I always get a call ahead of time and they drop it exactly where I need it no matter how tight the job site is. They even rolled it out on 2 x 4s so as not to damage the driveway, which was in disrepair anyways.

2.0
Review by Hernan M. in Indianapolis, IN

I was working on a demolition project, and I needed a 25 yard dumpster for the debris from a residence I was working on. I got the dumpster I needed from Greenway Dumpsters, and everything went well. Their response times were great, and pick-up and delivery were both on schedule. The only issue I had with them was they didn t explain the possible additional fees before providing the dumpster. They explained the fees after they charged me more than was quoted to me.

Greenway Dumpsters delivered our 20 yard roll off dumpster after just one phone call. They placed it in the precise location we needed to best complete the job. I requested pick up service through e- mail with the intent of following up with a phone call, which proved not to be necessary. I would call that excellent customer service! Thank you, Greenway, for your part in our replacement roof!

5.0
Review by Gayle D. in Indianapolis, IN

I was happy about the fact that I could rent the dumpster for a week. Greenway Dumpster picked up the dumpster exactly one week later. I was able to clean out my garage without feeling rushed. Like I mentioned, I m so happy that I called Greenway Dumpster and will use their services again if necessary. And what I really liked was the cost of the dumpster. I know with all of the stuff in my garage, I would have paid much more from one of the men from the block. Thanks Greenway Dumpster!!

4.0
Review by Name Withheld in Noblesville, IN

I needed a 25 yard dumpster for the resulting debris of a house cleanup I did removing old furniture, junk, and trash. Greenway Dumpsters provided us with one. They arrived on time with a clean one and set it up for us, and they picked it up in a timely manner, too. I have no complaints. This is actually the third time we used them. They did a fine job, and we ll definitely use them again.

I needed a 10 yard dumpster for a construction project I worked on. Greenway Dumpster dropped off the one I needed as scheduled, and I was very satisfied with their service. I ll be needing them again pretty soon, and I ll also be recommending them to others.

Greenway Dumpster got me the 40 yard container I needed when I had a demolition project. I have zero complaints about them. I had the dumpster emptied 3 times, and they were always on time for deliveries and pick-ups. I would definitely use them again.

5.0
Review by Name Withheld in Indianapolis, IN

Jason was courteous, knowledgeable, helpful, and reliable. The dumpsters were delivered and picked up right on time. Our landscaping, driveway, and property were treated with respect and care. The price was very reasonable. The company went above and beyond to help with our special moving needs. I recommend Greenway Dumpsters wholeheartedly. It is a great company. Five stars!

5.0
Review by Michael L. in Noblesville, IN

I am renovating my kitchen and living room and needed a 10 yard container to remove construction debris like drywall, wood, insulation materials, and broken tiles.They delivered it on time and picked it up on the 3rd day when I called. I will use them again in the future.

I made a request for a 10 yard dumpster from Greenway for drywall and miscellaneous junk from my garage. They were out of 10 yard containers so they sent a 15 yard instead. I had it with me for 7 days. The guy that came out was polite and courteous, and went above and beyond what they said they were going to do. They fulfilled all my requests. It s a great company. 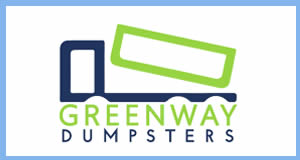