Customer satisfaction is top priority with Jackson Compaction. We strive for excellence and pay close attention to detail. Our staff is knowledgeable and friendly and we have a reputation for great results.

I got a couple of 15 yard dumpsters from Jackson Compaction for wood, drywall, and other construction debris from a home remodeling project. I was informed of the size of the container but they didn t inquire as to the stuff that would be put in it. So instead of renting just one, I ended up needing to get another, and now I have to pay for 2 dumpsters. They gave me a little discount on the second one though, so that was nice. Also, service was pretty good.

We ve been hoarding some excessive equipment and junk and wanted a dumpster so we could get rid of it all. I made an online booking with Jackson Compaction and got a notification that said I would get a response within 24 hours. I never got one, so I called the contractor directly. They said they weren t informed of the request, so I just went ahead and booked it over the phone. I asked for a 10 yard bin, but they didn t have one available, so they brought us a 15 yard instead for the same price. I was pleased with that. The container was dropped off on the day expected, but the Pickup was a day late. However, there was confusion on whether we were home or not, so that wasn t really a problem. We had the dumpster for a week.

I rented a 30 yarder from Jackson Compaction for 30 days. They went out of their way to get the dumpster to us on time, and we had no problems with them.

Jackson Compaction took care of business! We had all the tear out of a house renovation ready to go in a dumpster and I called them up 7am that morning and they arrived to the site by 8:30. Two days later they came and hauled it away. Their price was fair and their service was great.

Jackson Campaction was easy to find on the internet and their service turned out good. I had a lot of attic insulation that I was tearing out and replacing. I actually should have gone with a larger dumpster. I ended up using two dumpsters and the last one was overflowing a bit but I didn t get any grief for it. 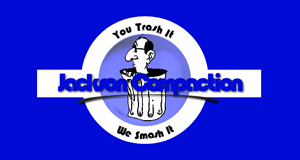