Junk General is open seven days a week, rain or shine! We go above and beyond our customer's expectations to deliver the best possible junk and dumpster services. As an eco-conscious business we care about the environement and recycle as much debris as possible.

Choose Junk General to take the hard work out of junk and bulk trash removal or simply rent a dumpster and load it yourself upon convenience. 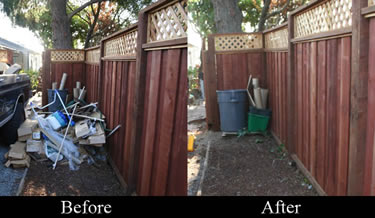 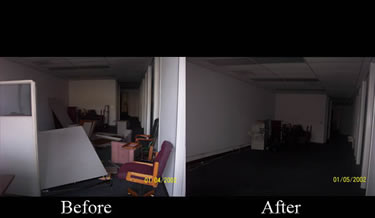 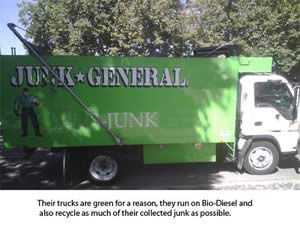 I contacted Junk General to haul away some appliance and trash bags from our property in Daly City, CA. They did fine but they were late. I had to call them 3x to avoid conflict with my office schedule. And they re charging me higher that what was agreed upon. I insisted on paying just the quoted price and they agreed in the end.

We were getting rid of a bed frame, 2 queen mattresses, a dresser, a couple of night stands, and a book case. Junk General was great. They were there early, grabbed everything, and got out. It was fairly easy, as we live in a one-story house, but they did a good job and exactly what I expected.

We were cleaning out our condominium unit and needed to get rid of miscellaneous household junk. Junk General did an awesome job cleaning out the condo for us.

The guys at Junk General picked up a broken bed frame for us. They came on time and they did a good job.

Our office called up Junk General and they did a good job. No complaints. In fact, I used their services again just last week. We needed to dispose of some paper, an old office bin, and miscellaneous trash.

I had 1 piece of furniture for pick up - 5 ft long by 6 ft high book shelf with a little desk. Junk General was prompt n getting here to get it, and they managed to haul out the shelf without scratching or hitting anything. They did a good job.

5.0
Review by Andrew in Oakland, CA

I needed to haul away 5 cubic yards of junk, mainly a desk and lot of debris. Junk General did an amazing job! They were very nice and helpful and they cleaned up great. I would use them again.

I needed someone to pick up a couch and a love seat. Junk General did just fine picking it up. They were on time and everything was done quickly.

We needed to haul away a love seat, a twin bed, 4 dresser drawers, a crib and a lot of trash bags. I was very happy with Junk General. They were professional and easy to talk to and their service was absolutely lovely.

I needed some benches and about 20 chairs to be hauled off from an assisted living facility and I was quite happy with the service with Junk General. They were courteous and professional and they were able to get the job done in no time.

I had about 3 quarters of a load of construction debris that I needed to get rid of and Junk General did the job just fine. Everything was ready to be picked up which is what they did and they also cleaned up what s left afterwards.

I needed to haul away a refrigerator and a bunch of other stuff. Those guys who came over from Junk General were great! They were quick and thorough and I would definitely use them again.

I needed someone to haul away a small box spring, a mattress, sofa and a little bit of wood. I was pretty happy about the service with Junk General. They were prompt, fast and professional.

I had some yard waste that needed to be removed and Junk General did a pretty decent job cleaning up. My issue about them though was that I felt so overcharged for the amount of waste that was involved. I honestly wouldn t use them again.

I would like some items hauled out from my girlfriend s parents home. Mainly lots of old furnitures and a whole lot of garbage. It s all roughly two truck load s worth of stuff that we needed to get rid of. The guys who came over from Junk General were really great! They were friendly and very helpful. There was quite a lot of heavy lifting involved and they were awesome.

We had a rental property that was vacated and a lot of stuff was left behind. Mainly large furniture items and other misc. junk. Junk General came thru in a timely fashion and had everything out of there in no time. They were sure to clean up real well and we were very satisfied with their service.

I had some construction work done and needed some flooring and other debris to be hauled away. Junk General was excellent. They came on time, the guys were great, and I would use them again.

I had my foundation done and needed to get rid of a lot of dirt, concrete, bricks, mortar, and cement. Junk General sent Omar over and he was amazing. He came to give me an estimate, then called back later about coming back to pick the stuff up, since they had a cancellation. I had this big planter in the front with a cement border, so I had to add that and some other debris for them to haul away, but it was no problem at all. The guys were polite and worked really fast with their wheelbarrow, going from the site to the truck and back; it was really quite fun to watch!

I was moving out and needed to have some furniture hauled away. Junk General came on time and cleaned up after the hauling. Everything was done quickly.

We had a few love seats and a lazy boy to be removed. I was very satisfied with Junk General. They were very professional and timely given the short notice. I ll definitely use them again if I have to.

I was removing a couch from home along with two dressers. Junk General was very professional and arrived on time and gave us a 15 minute heads up. They called before they arrived. They were very pleasant when they did the whole thing. I thought that the price was reasonable too.

I was getting rid of about one cubic yard of plastic sheeting -- the type of stuff painters use to hang on walls. Junk General showed up on time and took away the junk on their own. Nothing too complicated about it, just what I was expecting.

5.0
Review by Linda H. in Princeton By The Sea, CA

I needed some items left behind by a tenant hauled off. Junk General did great. They were on time and took all the stuff.

The house that I took possession of was filled with junk and the good furniture ended up going to Salvation Army. I needed to get rid of everything. Junk General did an outstanding job. They came and cleaned out everything for me. I would use them again in a second, and I would recommend them again anytime. They were efficient and did everything they said they would do and did it well. 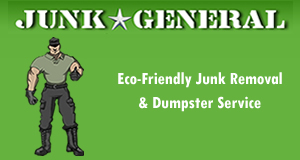