Junk King is a locally-owned and operated full-service junk hauler. Not a dumpster, but a dumpster alternative. we provide the labor to load up and haul away just about any type of junk or debris from your home or business. Our prices are amongst the lowest in the area, and our trucks are up to 20% bigger than the competition's, which means we can haul more junk faster and without raising our rates.

Junk King is a locally-owned and operated full-service junk hauler. Not a dumpster, but a dumpster alternative. we provide the labor to load up and haul away just about any type of junk or debris from your home or business. Our prices are amongst the lowest in the area, and our trucks are up to 20% bigger than the competition's, which means we can haul more junk faster and without raising our rates.

We offer reliable, fast and friendly services. We work with homeowners, real estate agents, business owners, and commercial property clients to cleanup and dipose of junk and debris in an environmentally responsible way.

Same day or next day service available.We donate or recycle about 60% of the items and junk we haul away, helping to keep our environment clean and green.

I hired Junk King back in December to remove some unwanted items and I was very satisfied with their company. I didn t experience any problems while working with them which is very important to me. It was a hassle-free transaction and they did everything just as expected. They re a five star service.

I had a very pleasant experience working with Junk King. They offered the best price and they were willing to come out right away to take away some yard items, like compost bins, an old dog house, and a table. Everything was hauled away swiftly, and I would likely use them in the future.

Junk King removed a dog house, kiddie pool and other random items. I had the items sitting in front of the garage to make it easy. They did a good job.

I cleaned out a property that we put up for sale and needed to remove the resulting debris like old broken furniture and trash about 1 to 2 loads. Junk King of Dallas did the job for me. They were on time, picked up the items at curbside and cleaned where I had the items and left it spotless. They did a great job.

We dismantled an old green house that was made out of wood. We called Junk King to remove it once we had it taken apart. It was a very quick job and they were nice people. Later I recommended them to my dad and I think he did call them just recently. Thanks you guys.

We were given the task of cleaning out a relatives home. There was a washer and dryer, which were the heaviest items, and also some household junk. Junk King was reasonably priced, so we went with them. The guys were very prompt and did a wonderful job. They also cleaned up after the hauling.

I m part of a community of 900 students and our trash compactor had been broken for a week, so we needed to get rid of a lot of miscellaneous trash. Junk King came over to haul everything away for us. It was a job well done.

Junk King showed up fast to haul some junk for us (refrigerator and some flooring). It was a bit pricey, but they did a good job.

I just got a new place and had some items to get rid of from the move, so I hired Junk King to clean it up. The crew did a nice job. I had everything ready for them to pick up from the garage, but they were prompt and I had no issues with their service.

We hired Junk King to get rid of some sheet rock debris in plastic bags. Can t complain; had no problems with them. I d use Junk King again for future cleanups.

Junk King came out with a huge truck and loaded everything up. It wasn t that difficult to get to the junk because everything was piled up in the garage. The crew was nice and professional. I have recommended them to people I know and I actually have called them to do another job.

Haul 2 roll off dumpsters full of trash. I was satisfied with Junk King. They simply came through and did the work as I expected they would.

We hired Junk King to pick up about a half truck load (standard size truck) of household junk. The crew did a really great job. I am very happy with their service. I actually called them again and they are going to do another job for me.

I needed a couch, an old recliner, and a wooden door to be hauled away. Junk King did a good job and removed everything quickly. They communicate well and even gave me a heads-up when they were on their way. They came on time and actually had to wait a few minutes for me, but they didn t make a problem of it.

I needed to have a couch, TV, some cabinets, and a bunch of other junk hauled away. The guys from Junk King were great. They were very polite, quick, did all the work, and I believe it was a fair transaction. I m actually going to ask them to do another job for me right now.

I needed a mattress, grill, and a bunch of other items to be hauled away. Someone from Junk King came to haul away my stuff and he did fine. In fact, he did a good job and I was pretty satisfied. The bad thing is, I made an appointment for him to come back the next day for some more items, and he said he would, but they never showed up and it messed me up pretty bad.

I needed a lot of items removed from my home - a vacuum cleaner, large cardboard boxes, end table, stone and tile, bricks, shelf, table, and a door. I found the price for Junk King s services to be a bit deceptive. They left a lot of room for negotiation from the quoted price to the actual price that I haggled it down to. The haggling was a pain, but other than that, they did well.

We needed our garage cleaned out and all the junk hauled away. Junk King did a great job. They were lovely and I would recommend them highly.

We needed a brick wall taken down and hauled off. Junk King did a great job. No complaints.

We were getting rid of a variety of old household items: some clothes, books, furniture, and other stuff that were no longer in good condition. Junk King came on time for the hauling and did a good job. They were friendly and professional. No problems were encountered.

We had dismantled a couple of wood sheds and needed them removed from our property. Junk King had to make two trips to haul everything away. They came on time on the first day, but was quite late on their second hauling. I can t remember now what their reason was for being late, but it seemed legit - although I wish they had called us earlier on about the delay. When we tried to tip the guys, we were told that they had a No Tip Policy , which I m really curious about. Anyway, overall, they did a good job and I would call them again.

We needed an old dishwasher, stove, ceiling fan, air conditioning unit, and a small bathroom sink with vanity to be hauled away. The guys at Junk King were great. They were very professional, cooperative, accommodating, and left the place clean. They took everything away that I wanted them to. It was nice seeing the professional way they had of stacking and arranging the items to fit everything in their truck. We highly recommend them!

I need to get rid of an 8 x 4 x 3.5 ft wooden crate. Junk King was very easy to coordinate with. They got the job done.

We were using my garage as a storage room and had a year s worth of old household stuff we wanted to get rid of. Junk King did a great job. They came on time and worked very fast. The other half of my garage has been stacked up with shelves, so we will call them again for another job soon.

I had a lot of junk to get rid of - some furniture, TV, TV stand, bed frame, tables, chairs, snake cage, and miscellaneous trash and debris - probably around 4 pickup truckloads. They needed to make two trips to do the whole job. I wasn t home when they came back for the second haul but, overall, there was no problem.

I was getting rid of some yard waste and hired Junk King to come and collect it for me. It only took them about 30 to 45 minutes, and I would say it filled just under half their truck. They did a good job and I appreciated having all that stuff gone.

I needed to have a carpet and a bunch of miscellaneous items removed from my home. The guys from Junk King were great. They were very helpful and I have no complaints whatsoever. I would highly recommended them.

I needed some old garden tools, wall decor, and some boxes hauled away. Junk King was excellent. They were very helpful, and they swept and cleaned everything up. They did a very good job!

The job was to haul away a 40 ft. fence that we had piled up. They took all the debris and cleaned the area up good. They were on time and they did what they said they are going to do. I though it was a little expensive, but they did a good job nonetheless.

I had a queen size sleeper sofa, 1 leather chair, and a twin size sleeper sofa and all of them were old so I decided to get rid of it all. I am amazed with the service of Junk King, they came on time and picked up all the stuff that I wanted to remove from my house. They were very detailed on explaining the cost of their service. I will use them again and definitely recommend them to my friends and families.

I ve been transferring from different apartments because of my job, so I had a couple pieces of furniture that needed to be removed. I was very happy with the service provided by Junk King. They arrived on time, provided a reasonable price and completed the work. 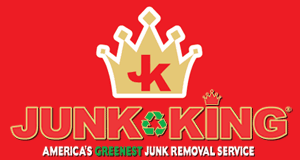