Junk King of Pittsburgh is your one-stop-shop for junk removal services and affordable 12 yard dumpster rentals. We'll load up and haul away any type of junk you have to get rid of, with the exception of hazardous materials. Our prices are amongst the lowest in the area, starting at just $59.

Junk King of Pittsburgh is your one-stop-shop for junk removal services and affordable 12 yard dumpster rentals. We'll load up and haul away any type of junk you have to get rid of, with the exception of hazardous materials. Our prices are amongst the lowest in the area, starting at just $59.

We're a locally owned and operated junk hauler that offers ultra-fast and friendly service. We work with homeowners, real estate agents, business owners, and commercial property clients to cleanup and dispose of junk and debris in an environmentally responsible way.

We donate or recycle about 60% of the items and junk we haul away, helping to keep our environment clean and green. 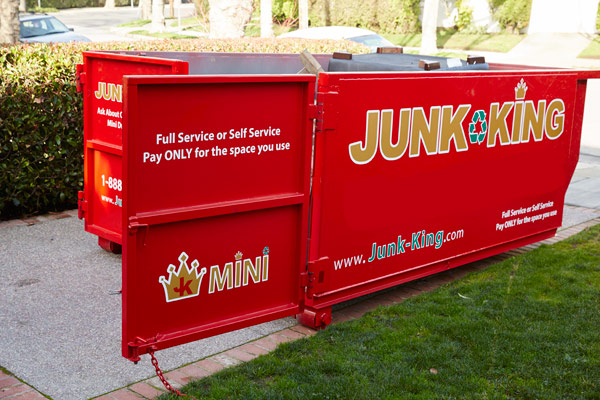 I had some very old pieces of radio equipment, as well as heavy gym equipment, that I knew little to nothing about. I didn t have the time or desire to figure out where to take them and just wanted to them gone. Some friends from my office had mentioned hiring Junk King of Pittsburgh PA for several different projects and highly recommended that I give them a call. They were able to come and remove everything quickly and the price they charged for all the work they did shocked me. I was expecting a much higher bill. I m very glad they were recommended to me and I ll be sure to spread the word, too.

I contacted Junk King of Pittsburgh, PA because we had household items and trash from a clean out that had been sitting around the house accumulating dust. I was so happy that they were able to do the job right away and got to our house quickly. Once they were here, we didn t have to wait long at all for them to gather everything and haul it away. They did everything we asked of them and made sure to leave the area clean and spotless. Their pricing was also very reasonable. I highly recommend their junk removal service.

5.0
Review by George B. in Murrysville, PA

Junk King did an excellent job. They came in and tore down a part of a swing set that I had to remove, pieces of a jump set, a set of two televisions, and a couple of other pieces of junk. They offered me a great price for a great service. They cleaned up after themselves, and I have nothing but high remarks to give them.

I was very impressed with Junk King s service. I was in need of help with cleaning out some household items and some other junk lying around the house. Among the junk haulers I reached out to, they were the only one who responded promptly. I appreciated that they were very accommodating, which is rare to find nowadays. I was also impressed by how fast and thorough they cleaned everything. Great job, Junk King.

I was trying to get rid of some things from my business—some papers, a computer monitor, and other junk. I tried calling other junk haulers in the area, but Junk King was the only one who got back with me. They offered me a price that seemed fair for a 12 yard bin. The whole transaction was smooth. They delivered the bin on time and placed it where I needed it. They hauled it away on time too.

I inquired with a lot of junk haulers in the area, and Junk King responded immediately. They were very professional, from the moment I called them to the day they hauled my stuff out. I was selling my home and they hauled everything quickly and efficiently. I was so happy with the overall service.

I needed an organ, stereo, sewing machine, and other odds and ends picked up and hauled away. Junk King did a fine job on this request. They responded quickly and did the pick up as scheduled. I have no complaints at all.

Junk King of Pittsburgh hauled away a large desk, 2 TVs, a patio bench, a small cabinet, 4 lamps, a TV tray set, 2 reclining chairs, a hamper, and a microwave for me. Junk King was just wonderful. The two guys who came in were very courteous and professional. They worked in a very efficient manner, and the work was done for a very fair price. A job well done from these guys—I would recommend their services.

We had some wooden fence debris that Junk King hauled away for us. The truck showed up on the right date/time, and they removed all the debris we needed gone. All I can say is that they did a thorough job.

I needed to remove 2 couches, a recliner, 2 refrigerators and a stand up freezer. I called Junk King of Pittsburg.They took the items that were in front of the garage with no problems. They did a nice job.

I needed a sofa (88 inches long), a love seat (approximately 64 inches long) and a reclining chair removed which were located in the living room just inside the front door. I had the removal done by Junk King of Pittsburg. They didn t leave a mess which we appreciated. I was very happy with the service.

We needed an old freezer removed and disposed of. We bought a new one so we thought of recycling the old one. It s rusty here and there but I m sure some of the parts could be used. We couldn t sell it in the condition it is in so we had Junk King pick it. I didn t have to help them carry the darn thing which was nice. I d say they did a great job.

We had to get rid of a piece of metal 1 by 3 sitting on a 2 x 4 wood. I ve used Junk King twice now. They were very good and quick. I would call them again if there was another necessity. I totally recommend!

We had a large playground set made of pressure treated lumber removed. I am very satisfied! They recycled all the metal parts. I d give them 5 stars for coming on time. The price was quite high but the job was carefully done. It was very difficult to remove. If my husband and I did it, we probably wouldn t know what to do with it.

We finished some house cleaning and had a couch, desk, mirror, and some cabinets to dispose of. Junk King did the job and I thought they were really great. They even gave me pointers for when I will need to use them again, because I had everything ready to go and they told me I didn t need to do that next time, since that was their job.

Junk King did a stellar job removing some kitchen appliances for us. They were quick!

The job: Dispose an upright piano. Junk King took the piano. It was pretty straightforward, they came in, took the piano and they got paid. I don t have any complaints. They did a great job.

I needed to get rid of a few cardboard boxes, paper, wardrobe things and some regular trash. Junk King definitely gave me my money s worth. They re very nice and efficient, and I would use them again.

I needed someone to take away an upright piano and those guys from Junk King did a good job. They were a bit expensive, but they definitely know what they were doing.

I had some lumber and some junk that I needed to remove from the basement. The cleaning crew who came over from Junk King was really great. They were able to come over in such short notice and was able to finish the job on time. As far as I m concerned, they come highly recommended.

I needed someone to haul out all the junk from a garage clean out. I was very impressed with those guys from Junk King of Pittsburgh PA. They were polite and professional and they did a very thorough job.

I was getting rid of a recliner and I called Junk King of Pittsburgh PA to pick it up. The guys who came over were really nice and courteous and they give quite a fair price. I thought they were really great I even recommended them to my brother who needed the same service.

I wanted to get rid of a few mattresses and a bunch of other stuff. I think those guys from Junk King of Pittsburgh PA were cool and professional. They were straightforward about the details of the project like the cost and for which items it s for.

There was about a 5 ton dump of construction debris that I needed to get rid of, mostly plastic pipes.I was very satisfied with Junk King of Pittsburgh PA. They were really professional and they did everything I expected them to.

I needed someone for a yard debris removal project, like shrubs and stuff. Junk King of Pittsburgh PA was just fine. They came here when they said they would and did everything they were supposed to do.

We needed to get rid of an upright piano and Junk King of Pittsburgh PA was very good. They were prompt and very polite. They also had all the necessary equipment to do the job. My wife and I were very satisfied.

I needed to remove a few pieces of furnitures like a queen size bed frame, a dresser with mirror and an 8 ft. sofa. Junk King of Pittsburgh PA was pretty good. They went in and got the stuff upstairs and was over and done with quickly.

I needed a couch, a couple of chairs, an entertainment center and a desk removed from my home, and Junk King did a stellar job of it. They were very efficient and I m pleased with their service.

We needed to get rid of 3 firesafe filing cabinets. each has 4 drawers, 6 ft. wide and about 4 ft. tall. Other smaller stuff needed to be hauled away too. Junk King did a good job. I would definitely use them again.

I had some household trash, including bags, cardboard, two air conditioners, house fan and queen size mattress that needed to be hauled away. Junk King did an awesome job. I have no complaints at all, they came in on time and they worked really fast.