Liberty Waste Removal is based in Crowley and provides service in Tarrant, Johnson, Hood, Parker and Wise Counties. We stock versatile 20 yard dumpsters that are ideal for construction, renovation, junk cleanouts, trash, light concrete loads, and much more. Get your free 20 yard dumpster quote by giving Liberty Waste Removal a call today! We look forward to earning your business.

My 1,200 sq. ft. ranch house built in 1984 had old cedar siding that needed to be discarded and hauled off to the dump. We also had some junk, an old bathtub, and a toilet from our inside remodel, plus about 10 old windows and old doors laying around outside. Our yard was an eyesore. I called four dumpster companies and Liberty had the best price. The other companies wanted a delivery and pick up charge plus the dumpster charge on top of that. I chose Liberty. Richard Villarreal (the owner) delivered a clean dumpster the day after I called. He was very professional and helpful answering all questions that I had. He also explained that if I went over the 4,000 lb basic price, he would call me from the dump. He dropped off the dumpster on time and then my wife and I had a week to fill it up. Richard also picked up the dumpster on time. He called us from the dump to tell us we were within the 4,000 lb weight limit so we didn t need to pay out any more money. I was very pleased with Liberty and if I ever need a dumpster again, I ll call them first. 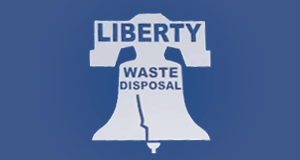