Matt Scrap Metal and Junk Removal can help simplify your life by removing your unwanted debris and clutter. Our team is professional and will come to a location that is convenient for you. We work swiftly and will clear out your junk with minimal disruption to your life.  We provide compassionate estate clearing services, appliance removal, old furniture removal and more. We are the TOTAL solution for junk removal. Call for a free junk removal or scrap metal removal quote with Matt's.

I needed to remove an old freezer that was stored in our garage. Matt Scrap Metal and Junk Removal did the job for me. I have no complaints. They arrived on time and hauled the item away to their truck. The service was fine, and they did a great job. I would recommend them to others.

I needed to remove two couches and a coffee table from the house before a certain date. Matt Scrap Metal and Junk Removal did the removal for me. They arrived on time and hauled away everything I wanted gone.

I called Matt Scrap Metal to haul away a junked SUV from the lot. They came out and towed the vehicle away from the property. They didn t charge me anything; it was an even trade for the value of the truck. I told them to come back and get some other scraps that I have in the lot. They did a great job and I d definitely recommend them.

I needed to remove an old bed, a washing machine and a bunch of boxes filled with stuff, and junk. I called Matt Scrap and they provided me with the service. I told them over the phone that it would be a big volume of stuff, and they told me that they ll be sending two trucks. Unfortunately, one broke down on the way. The guys in the truck that came tried to fit everything in the truck, but they still left a lot of junk. I ended up removing the rest of it by myself. They still charged me the full price after this. Service was OK but I would more likely hire a local guy over them.

I clean out a house that was previously owned by a hoarder/machinist who collected a lot of junk, such as lawnmowers, steel pipes, bicycles, plywood, some cabinets and renovation debris. I went ahead and had Matt Scrap Metal do the job for me. They were on time for the job. I actually did some of the moving and throwing of the items in the bin, which I won t do again. I ll just let them handle the removal next time. They did a fine job and I m actually trying to get ahold of them to do another removal for me. 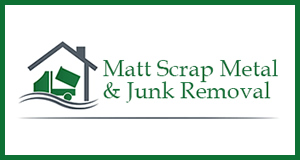