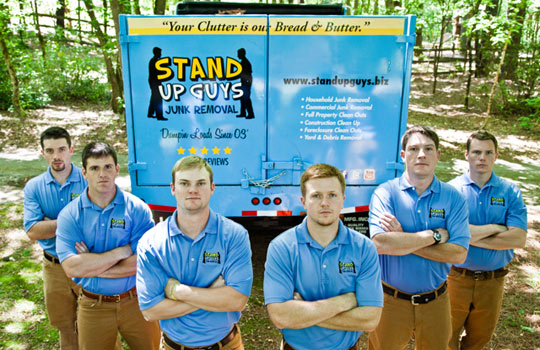 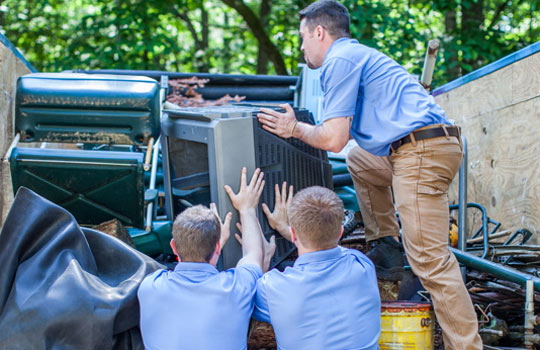 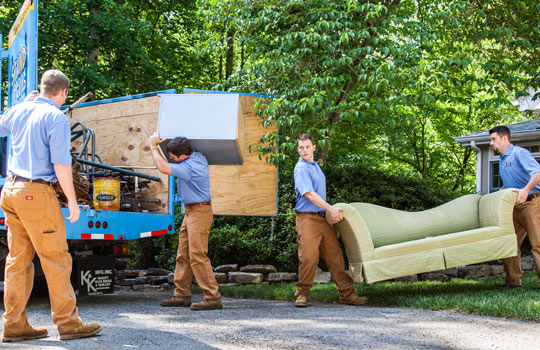 I needed a sofa and chair removed from the third floor. Stand Up Guys Junk Removal did a good job handling the removal, and they showed up on time. I highly recommend these guys and have no complaints at all.

I needed some paint cans, a mattress, and other junk removed from our property. Stand Up Guys Junk Removal came and finished the job in a timely manner, and they were very courteous. Although the price was a little higher than what I anticipated, I feel like I got what I paid for. I highly recommend their services.

I had a garage full of junk that I wanted to dispose of. The Stand Up Guys called when they were on their way with an estimated arrival time. They arrived when they said they would and quickly got to work, efficiently loading my junk. Both guys on the site were pleasant, professional, and knowledgable. I appreciated the way they packed items in the truck to ensure the volume—on which pricing is based—was fair. These guys are the best. I have used them twice now and will continue using their services, and recommend them to anyone.

Used this company for a sofa removal. The crew that moved me in had an extremely difficult time getting the sofa in elevator....took well over an hour!!!

I needed an old hot tub hauled away, and I went with Stand Up Guys Junk Removal. They were really great. They came and loaded the tub in less than 15 minutes!

I needed some old mattresses and general household junk hauled away from my property. Stand Up Guys did the removal for me. I couldn t ask for any better service or company. They were on time, very professional, and polite. They did an excellent job.

I needed to remove some junk from the house. Stand Up Guys did the removal for me. All I can say is that they did a very good job, and I would give them 5 stars.

I cleaned out the house and needed to get rid of a lot of stuff in the attic and basement. Stand Up Guys did the removal for me, and I was happy with the service they did. They get all the highest marks from me. They did a very good job, and I would use them again.

I needed to have an old mattress, a dresser, and a chest hauled away. Stand Up Guys did the removal for me. They arrived on time and were very nice and courteous. They went in the house and took everything I wanted gone. They did an excellent job, and I would recommend them to others.

I needed to remove a backyard play set, an old grill, a couch, a dog house, a few boxes, and a basketball hoop from the backyard. Stand Up Guys did the removal for me. I have nothing bad to say about them. Everything went well. They arrived on time for the appointment and hauled everything to their truck. I would use them again. They did a good job and I do recommend their service.

Stand Up Guys handled a garage junk removal job for us. I called them, setup the appointment, and they arrived as scheduled. They charged us extra for some paint cans we needed removed, but it wasn t a big deal. I consider everything a job well done.

I needed to empty our garage of unwanted items like an old sofa, a couple of mattresses, an old window, some fixtures, old toys and a few things from the backyard. We had Stand Up Guys do the removal for us. They were on schedule and went to work immediately. They cleaned out the garage making sure that they got the items we needed removed and then they went to the backyard and did the same. Before they left, they tidied up and made sure that they didn t leave any mess. Their price is also reasonable. They really did a good job and I recommend them.

Stand Up Guys removed a mattress, box spring, some chairs and boxes of miscellaneous items from our home. They were amazing! The whole process was a good experience.

I needed to have these items hauled away: Mattress, bed frame, old coffee table, trash and other items. Stand Up Guys was hired for the junk removal, and they showed up right on schedule. They finished the job without any issues and tidied up before leaving. They did a good job.

I need furniture removal, sofa, love seat, coffee, table, 2 twin beds, 1 queen bed, small computer desk with a chair, and a TV. I am very impressed with the pricing that they gave me. I had a whole truckload to get rid of and they gave me a very manageable price. I m happy with their service. It was a pleasant experience.

I am moving and needed to get rid of my old couch, refrigerator/freezer and a small box of other stuff. I went with Stand Up Guys and I was happy with their service.

We were moving and needed to get rid of 2 couches, 3 mattresses, 2 wooden drawers, and an old stereo. Stand Up Guys came on time and even had to go up and down flights of stairs as some junk was in the basement. They did a very good job.

We had just moved and needed some boxes to be removed from our basement. There was an exterior door from the outside that leads to the basement, so it was an easy haul. Stand Up Guys were professional and offered very good service. The price was reasonable as well.

Cleaning out my parent s house and had quite a bit of junk we stacked up into the garage for the junk crew. Stand Up Guys was able to haul it away easily. They asked for $85 for the first hour, but the bill went up to around $200, which was a very fair price since they loaded their truck to the maximum and had gone above and beyond what they were supposed to do. They were very cooperative and did a great job.

Had some random junk and other stuff laying around. Decided to hire The Stand Up Guys to pick it up and haul it away -- they did a really good job. My husband was there but he didn t have to do anything. They piled all the stuff up, and got loaded it into their truck. They didn t charge any extra fees, and did a really good job.

Two large bookshelves had to go, along with some stuff my wife wanted to dispose of, including some cushions and a whole lot of household junk. Stand Up Guys got to our place even earlier than the set time and knocked it out pretty quickly. They were super nice, friendly, and professional. They had to haul away a whole truck full of stuff and they really did a good job.

We decided to have a hauling company come pick up some stuff for us, since we were moving. Stand Up Guys came the same day I called them, and they stuck to their initial quote, which was nice. They worked very very fast, like a whirlwind, actually. It was excellent, and I have referred a ton of people to them since then.

I had a rental property that I needed emptied. My former tenants left a couch, broken chair, broken desk, crib, and other household trash. Stand Up Guys came out and they were fantastic. They had to go up and down some stairs to haul the items away and filled a whole truck up. I was very happy with them.

We needed to get rid of a refrigerator. We called a few contractors and hired Stand Up Guys Junk Removal because their price was pretty fair for the job that needed to be done. These guys were incredible. They were very professional and we were very happy with their service.

I wanted to get rid of a broken sofa, a printer, some tables, and other miscellaneous items. Stand Up Guys had asked me over the phone what the types of items they needed to haul away. There were a lot of stuff that I wanted to get rid of, but they didn t have space in their truck for everything, since they had come directly to my place after a previous hauling job. Other than that, they did come on time and I was satisfied enough with their service that I would use them again.

We needed a 4-6 inch concrete patio sidewalk hauled away. Stand Up Guys came on time and cleaned up the site afterwards. I would recommend them.