Westphal Waste Services is family owned and operated with over 40 years of experience. We specialize in all kinds of containers to suit residential, commercial and industrial needs. We are committed to complete customer satisfaction.

We tore down a dilapidated gazebo and rented a dumpster for the debris. I called Ippolito and they rented a 10 yard dumpster out to me for 3 days. Everything was fine. The service was great.

5.0
Review by Glenn B. in Woodcliff Lake, NJ

We were redoing our basement and had a lot of leftover stuff from when we moved - some sheetrock, ceiling tiles, old flooring, rugs, a couch, and lots of wood. We called a few contractors, but only Ippolito was able to commit to a next-day delivery, so we rented out a 30-yard dumpster from them for two weeks. What I thought was very courteous was that, even though I requested the container for just two weeks, they said it wouldn t be a problem if I needed it for three, with no extra charge. They were very accommodating, polite, plus they delivered and picked-up on time. Another thing that struck me was how thoughtful they were toward their clients. When they were transferring the container back onto the truck, they accidentally hit a beehive in a huge tree we had out front. The guy rang the front door and informed us that the bees were right above where our kids might play. That was very cool. He could ve just driven away without telling me. That kind of effort you cannot pay for. So between their concern to protect my kids and the free rental days they offered, they just showed some really rare qualities.

We were remodeling our home and needed to get rid of some construction debris. Ippolito rented out a 20-yard dumpster to us and everything turned out great.

We had some renovations done on our house and needed a dumpster for the construction debris. We rented out a 30-yard dumpster from Ippolito Containers. The guys came on time and were okay. Initially, we were going to rent out the dumpster for two weeks, but we extended it to three, so we had to pay extra. We also had to pay for extra weight. I actually have an issue with this, because there is no way for the customer to know what the weight is of the items in the dumpster. It seems that each time we rent dumpsters, even if we only fill half of it, we get told that we have exceeded the weight limit and we end up having to pay extra. There should be a way for customers to gauge the weight inside the dumpster.

We were tearing off the roof and wood deck of our house and needed some dumpsters for the shingles, wood, and other construction debris. We ended up renting out four 30-yard dumpsters from Westphal Waste Services. They did what they said they would and delivered them on time. Originally, we were going to rent out the dumpsters for 3-4 days only, but they said we could keep them for as long as we needed, so we asked that they be collected after a week instead. They did a good job. 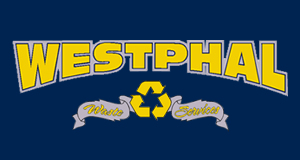