At D A Services, we offer excellent customer service and rapid delivery and pick up. We are a locally owned and operated waste management service that provides 10 - 30 yard dumpsters for residential and commercial use.

We provide flat rate fees for roll off container rental and a typical rental includes up to 7 days, but that time can be extended depending on your needs.

D A ServicesWrite a Review
4.0
Review by Anand P. in Lafayette, CA

I did a renovation project and needed a 10 yard dumpster for the resulting debris. DA Services were on time for drop-off. I had zero issues while using them. They did what they promised they would do., and there are no complaints on my end. I would definitely use them again. They did a good job.

I did a house clean up and needed a 10 yarder to haul away the junk that I no longer needed in the house. I have no complaints with the service I got from D A Services. Drop-offs and pick-ups were timely, and their dumpsters were clean. They did what they say they would and did a really good job.

I used D A Services when I needed to rent a 30 yard dumpster for a construction project. They were late in dropping it off, which made me start my project late. They were also late in picking it up, but the project turned out well. Overall, they did pretty well, and everything worked out in the end.

We had a lot of accumulated junk that we piled into 2 20 yard dumpsters. They were prompt with delivery and pick up. Everything went very well.

We’re renovating and had old cabinets, flooring, and construction debris to throw out. We got a 15 yard container from DA. They came on time, picked up on time, and they did everything the lady on the phone confirmed they were gonna do.

I was putting in some favors doing landscaping work and had some clean dirt to dispose of. This was the second time I rented a dumpster from DA Services and I had the same experience both times. They told me they would pick up on a particular day, but never even called to say that they couldn t. So the next day I had to call and they said they were on the way. They arrived around 4.30pm. The drivers are pretty friendly though, so that was a good thing.

DA Services got here on the day I requested. One thing though is they didn t come back when it was supposed to be picked up. I got an email that Monday saying, Call us when you re done , which I did. I didn t know I was supposed to call since we had already set the pick-up date. What if I hadn t seen the email on that day? Even then, pick up still didn t happen until Wednesday. You kind of anticipate things would go on schedule. It wasn t a problem necessarily, and they didn t charge me for the extra days it was here, but on a service standpoint, people would expect pick up on the day it was originally planned. Regarding the cost, I did look around a bit, so I know their price was really good and that, along with the on-time delivery, are the two most critical factors for me.

I was cleaning out my home and needed a dumpster for all the junk. DA rented me a 10 yard bin for 7 days. It was a good experience. They delivered immediately after I called and picked it up on time as well. There were no problems whatsoever.

4.0
Review by Israel in Oakland, CA

I needed to get rid of some trees and other yard debris. I rented out a 10-yard dumpster from DA for a week. They were good. They delivered and picked up the container on time. 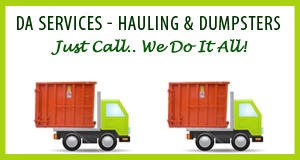