D & V's Trash Hauling can help you get rid of unwanted junk. We offer two affordable services, dumpster rental and junk removal. Our trailers have rubber tires so they won't damage your property.We accept concrete, dirt, plaster, household junk and more. You name it, we accept it! We have the largest fleet in the region so you are guaranteed the size and service you need. D & V's guarantees the cheapest prices around. We offer both rubber tire trailers and containers.

D & V s Trash Hauling did an excellent job with our dumpster rental. I randomly called them because I needed a 10 yard dumpster to get rid of a lot of construction debris and a little bit of junk in my garage. I was glad that I got a hold of them when I was trying to inquire with dumpster rental companies for the project, as they were quick, professional, and accommodating.

I rented a 15 yard dumpster from D & V s Trash Hauling for a bunch of trash I had. Everything went pretty well. Delivery was on time but they were a week late on the pick-up. I m not quite sure why, but besides that, everything was great. They also made sure that the dumpster was placed where it s most convenient for us.

We were re-roofing a house and found reviews for D&V s Trash Hauling. We preferred the flexibility and ease of use of the dump trailer over a huge roll-off dumpster. The trailer was delivered at the agreed-upon time, and they accommodated our request to place it in a tucked away spot. We were able to load 1,800 sq. ft. of decking and roofing, along with TVs, a chair, and other junk. We were also able to move it about as needed. During the project, we had some questions and contacted Derrick. He accommodated us and answered our questions. He was a pleasure to do business with. The rate was much easier to bear than a similar-sized roll-off. I highly recommend D&V s services.

I needed a dumpster after a mobile home demolition. I called a number of companies, but D&V s Trash Hauling called right back. I was able to order the dumpster and have it sitting in the driveway before I even got a call back from other companies. These guys are great and provide great service. I definitely would use them again. I had several glitches (not with D&V, but my own issues), and they worked with me on them. I felt like I was working with a couple of old friends.

Paid for a 10 yard dumpster and was brought an 8 yard trailer. I had half the job done and didn t have room for rest of the shingles. Also, nails were falling through wire siding of trailer, and I ll need to clean those up after the trailer is removed, especially from the driveway area. Delivery man said he would email my receipt but hasn t showed up yet.

D & V’s Trash Hauling was very helpful when I needed a dumpster. They were accommodating and put the dumpster where I asked. I would definitely use them again because their service was good and their price was reasonable.

We replaced the roof on our garage and needed a 10 yard dumpster for the resulting debris. D & V s dropped it off on time and the service was perfect. We had it on site for 8 days. It helped that their price was very reasonable. I would definitely use their service again. They did a great job.

The junk removal involved removing a mattress, two old analog televisions, some rugs, some wood, old paint cans, some small appliances, and other items that were not sold following an auction. I decided to rent a dumpster, and I got it from D & V Trash Hauling. They delivered a 15 yarder on time and as scheduled. We used it for 4 days and when we were done they picked it up in a timely manner. I didn t have any issues with it during that time. They did a good job and I do recommend them.

We moved and needed a 10 yard roll off container to remove the debris. D & V Trash Hauling provided us with a trailer type container. We were actually expecting a dumpster but it worked out great with what they gave us.

I did a roofing replacement and needed a 10 yard container to remove the torn down shingles and nails. I went with D & V s Trash Hauling. I was a little bit disappointed because they brought us a trailer not an actual dumpster. When we had small items to throw in like nails, we had to use a tarp so the small items didn t fall out. The driver was nice and pleasant though and overall it worked out fine.

We did an estate clean out and needed to remove some old furniture and 20 bags of trash. We hired D & V s Trash Hauling for the removal. My brother oversaw the removal and he said everything went fine. I am planning on using their service again in the near future.

I needed a 10 yard dumpster for some scraps that I have on my property, such as metal. I called D & V s Trash Hauling and they said that they ll deliver one at 8am. They were an hour late and brought me a trailer instead of a dumpster. They gave me the excuse that they don t open the office until 8am and that the trailer was also a 10 yarder. I just kept the trailer because I needed to remove the items from my property. I finished loading the trailer the same day and called them to come and pick it up that afternoon. I was told that they will, but they didn t show up until the following morning. When they saw the trailer, they told me that I made the pile of debris too high. They never informed me to begin with how high I can load the trailer. I ended up giving them 30 dollars worth of scrap just to offset the overweight cost.

We got a 20 yard from D&V for shingles from a roofing job. We were extremely happy. He s a very good guy and we would definitely call them again. 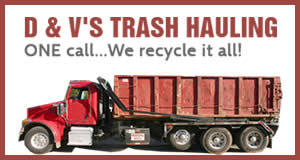