Hart Waste Removal is a family owned and operated waste removal and trash hauling business. We are committed to providing the best possible service in the waste industry. Our drivers and representatives are reliable, dedicated and courteous. Our service is always on time and there are never any delivery fees. 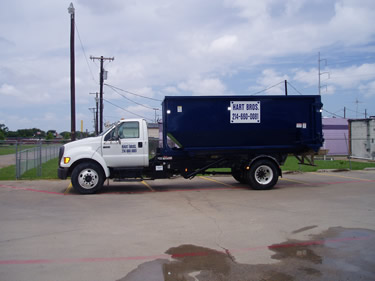 I needed a 10 yard dumpster for some debris. Hart Brothers Waste Removal took care of this request for me and provided me the right dumpster on time. They picked it up on schedule as well. All was good working with them.

I needed a 30 yard dumpster for a small commercial space remodel. I called Hart Brothers for the dumpster. I ended up getting a 50 yarder from them. The only issue I had was that it was delivered a day late, but after that everything was smooth sailing. They placed it perfectly where we can have easy access without it being in the way. I might be using them for a total of 2-3 weeks, and I would definitely be using them again on my next project.

We needed a 10 yard dumpster to clean out old office furniture and old supplies and junk from a storage area. I called Hart Brothers and they scheduled one for me. They were on time when they dropped it off, and we had it for close to 4 weeks without having any issues with it. We paid a bit more, not because we loaded it with a lot of stuff, but because we had it longer than initially planned. They were very flexible in regards to the amount of time we needed the dumpster. They were absolutely great, and if I need a dumpster again or someone I know does, I ll definitely call them.

Hart Brothers was prompt with delivery and pick-up, and I have nothing to complain about with their service. I rented a 20 yard bin from them to get rid of some construction debris.

Hart Brothers provided me with a 10 yard dumpster for a construction project. All I can say is that they did a good job. I can t complain about good service. I will be recommending them to everyone I know.

Hart Brothers was used when we needed a 10 yard dumpster for a home cleanup project. They came on time and placed it where I wanted it on our property. I don t have any complaints with the service they gave me; in fact, they were perfect for our project. Had the container for 4 days and they picked up when we were finished filling it. I highly recommend them.

I needed a 10 yard dumpster because I cleaned out my house and needed to remove trash and stuff I no longer needed. Hart Brothers were prompt with their delivery. It was dropped off on a Friday and was picked up on Monday.

We tore out a kitchen and needed a 10 yard dumpster for the debris. We went with Hart Brothers. It couldn’t have been any better. Everything went smooth.

I needed a 10 yard dumpster for compacted sand, and siding. I didn t really see the guys from Hart Brothers but they did deliver when they said they would and placed it in the alley by the back driveway where I needed it. I had it with me for a couple of weeks. It was all easy enough.

Got a 10 yard dumpster from Hart Brothers for two days to cleanup some sheetrock and carpet. They were quick with delivery and pick up. When I had filled up the container, the guy came to pick it up but had no change; it was only $5.00 so it was no big deal.

I maintain a Homeowners Association and needed to rent a dumpster for a bunch of builder s trash, random furniture, and other miscellaneous junk. We got a 10 yard dumpster from Hart Brothers for 7 days. Everything was fine; they put the dumpster in the exact area we wanted, and there were no problems at all.

We were doing a remodeling job on my property and had insulation, counter-tops, wood, sheetrock, and other construction debris to dispose of. We went with Hart Brothers for the dumpster rentals -- we needed several 15 and 20 yard dumpsters to get rid of everything. The price was a little bit better than others, and they did a good job.

We refinanced our house and had our roof and siding replaced. Hart Brothers was the dumpster company that I went with because they came highly recommended by our contractor. Everything worked out well.