Haul Away Container Service specializes in both residential and commercial dumpster rental. Our trucks are lightweight and designed with an innovative hook-lift system which allows for easy and accurate placement of dumpsters.

Our prices are competitive and our service is fast and reliable. 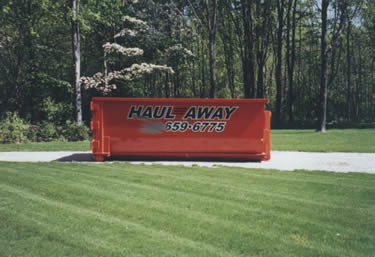 We use several dumpsters a month, and there are numerous reasons to stay away from this business. Delivery is never on time. And returns are even worse. Took them over two weeks to pick up a dumpster which was blocking the driveway. Customer service --horrific. On the last pick up, the owner, Brett, called to tell me that the dumpster was overloaded -- which it was. He told me that he would charge me an additional $100 to take it, and I agreed. He then proceeded to berate me for overloading it. I asked him why he was yelling and reminding him that I agreed and that I would pay the extra fee. He then yelled, verbatim, I m not yelling!! When I yell, you ll know it!

I scheduled on Monday delivery of a 13 yard dumpster for Friday. Called Friday morning to confirm the dumpster would be there between 2 & 4 p.m., and was told it was on its way. The dumpster did not show, call again at 4:15 only to hear that it would be delayed another 2 hours. After that time, I called again only to find out the dumpster was not going to be delivered on Friday and was dropped off Saturday morning. We needed time to fill and swap the dumpster so we lost that entire day, and it was no better Saturday. We filled the dumpster it within the first two to three hours and called to see if we could have it replaced and we were told it would be replaced between 2 and 4 again. Even though I called again to check during the day, no answer, no return phone call, the dumpster never showed and was never replaced. As a matter of fact, nine days later after multiple phone calls requesting the dumpster be picked up, the dumpster is still sitting in the driveway causing us issues with the buyers. I would never use this company. To make matters worse, the guy who takes all the calls has no answers, and if you try to get a firm answer he hangs up on you.

I did a renovation project and needed a 10 yard dumpster. Haul Away Container Service dropped off the dumpster I needed on time. The only complaint I had with them was that the truck that delivered it was leaking, and it stained my customer s driveway. I took some pictures, sent it to them, and notified them about the situation (which happened twice during the time I had the dumpster). They took 20 dollars off the price of the dumpster. They were easy to deal with, and we were able to reach a resolution with my complaints. Overall, the service was fine.

I needed a 13 yard dumpster for a renovation project I worked on. I called Haul Away Container because I had used them before. They were a day or two late for this particular project, which caused me a bit of a delay. However, no other issues came up during the 7 days I had it. Overall, they did a good job, and I would still use them again.

We needed a 10 yarder for leftover wood and garbage from a construction site, and Orange Dumpsters did a great job.