Junk King is Northeast Ohio’s premier junk removal service. We load up and haul away all types of non-hazardous junk and waste. Whether you have furniture, appliances, or yard waste to be removed, we can help. Our crew will arrive to your desired location, clear junk from anywhere on your property, clean up the area, and then haul it away to be recycled or reused. You won’t have to lift a finger or sweep a broom—let us do the work for you! Junk King’s prices are always upfront and clear-cut, and include all labor and disposal fees. With us, you’ll never be charged for blank space on a truck. You only pay for the junk we remove—nothing more, nothing less. 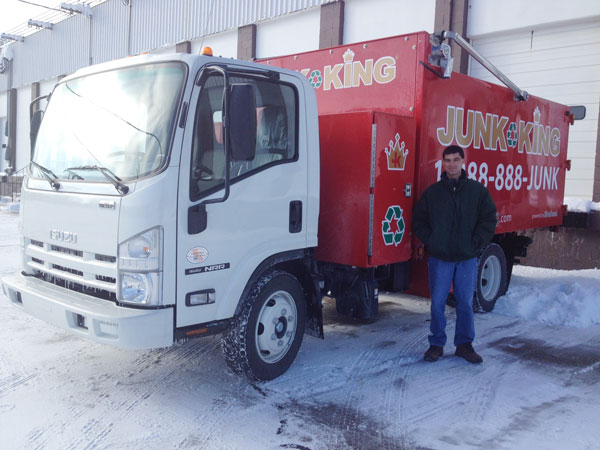 We called Junk King to remove shingles and cardboard from a roofing project we had just completed. They offered great pricing and showed up on time as scheduled. They did everything we asked of them and were thorough in cleaning up all of the debris. We didn t experience any issues with them at all.

We just bought a house and there was some construction debris in the garage. I called a number of people to haul it out, but I ended up using Junk King. They offered the price and timing. They came right away with a truck and hauled everything swiftly and easily. They were excellent.

I called Junk King North East Ohio and several others about renting a dumpster for our household junk. What sold me to Junk King was that they were very accommodating. I felt like I was talking to someone I knew. Others were just very matter-of-fact, and Junk King offered me a really great deal, too. My only issue was that they knocked off my rain spout on a part of my roof during drop off or pick-up. I guess they didn t notice. I also wish there was a drainage hole at the bottom of the dumpster to allow rainwater to drain instead of pooling and causing a bad smell. Overall though, they really did a great job. Everything turned out really well, and I will be using them for another project in the future.

I was cleaning up my property and my brother was doing a demolition of a deck. We needed a dumpster for all the debris and junk, so I called Junk King. Everything went well. They did a nice job, were very accommodating and efficient. There were no delays at all with delivery or pick up, and I am very happy with their service.

I needed a dumpster for some tiles, drywall, and other debris from a bathroom remodel. Junk King North East Ohio provided me just the right dumpster for the job. It was delivered on time, which made my job easier, and it was also picked up on schedule. It was a little overweight, but other than that, I had no problem working with them.

I was relocating out of state and had some old furniture that I wasn t going to take with me. The guys of Junk King North East Ohio were on time and came in and got the job done. They were very polite, too.