When you need a low-priced dumpster fast, Next Day Dumpsters is the solution. We have 10 to 30 yard dumpsters in stock and ready to be delivered to your home or job site.

We make renting a dumpster a simple and quick process. We'll help you choose the perfect container for the job and have it to your location promptly. Just give us a call and we'll come pick it up when the job's complete.

When you need a low-priced dumpster fast, Next Day Dumpsters is the solution. We have 10 to 30 yard dumpsters in stock and ready to be delivered to your home or job site.

We make renting a dumpster a simple and quick process. We'll help you choose the perfect container for the job and have it to your location promptly. Just give us a call and we'll come pick it up when the job's complete.

We're a friendly, local company that is 'A' rated by the BBB. We're focused on delivering an exceptional customer experience from the time the phone rings until the cleanup project is completed and you feel satisfied with our service. 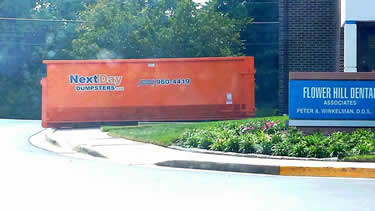 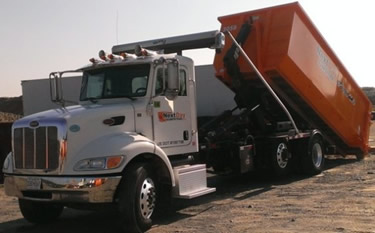 Next Day DumpstersWrite a Review
5.0
Review by Steven R. in Fairmount Heights, MD

I had a fence project that I put off for a very long time. It was a very old fence and I needed to tear it out and replace it. We scheduled a dumpster rental with Next Day Dumpsters to get rid of the old one but did not realize how long it would take the new fence from Home Depot during COVID. My fence was set to be delivered the same day as the dumpster, but my order never went through to Home Depot. When I called them to alert them to the situation, and they had the fence delivered to me two days later. Heather from Next Day Dumpster was willing to work with me on the situation, and I was able to complete my project on time, which helped me out a lot. A big thank you and happy smile to Next Day Dumpster for all their help.

I called several companies for a dumpster rental quote, but Next Day Dumpsters got back to me quickly and were very professional to deal with. I had a very good interaction with them on the phone, and have rented additional dumpsters from them twice since. While I did have a concern with one of their customer service reps, I was satisfied overall and found their service to be great.

I was working on a demolition and renovation project and required a 20 yard dumpster for the debris. Next Day Dumpsters was perfect! They delivered the dumpster as scheduled and when I was done with it they immediately picked it up. They also placed the dumpster in the right spot. I can t say enough about their service!

Terrible...When the driver picked up the dumpster and loaded it on the truck, a number of construction debris items fell out of the dumpster all over my driveway. When I asked the driver to pick up the dumped materials, he rudely refused and would not discuss the situation at all. He just got in the truck and drove off, leaving construction debris strewn across my driveway. I found this to be totally unacceptable and an awful way to represent a trash hauling service like Next Day Dumpsters. I would not recommend that anyone use this service!

I rented a 20 yard from Next Day Dumpsters for construction debris. I had the dumpster for a little over a week and was very pleased with their services. I d recommend them to others.

My father passed away and we needed to get the house ready to be put on the market. Not only did we need to clear out a bunch of junk, but we also had to tear down a small wooden shed. We rented a dumpster from Next Day Dumpsters and they were very timely and professional. The only problem I encountered was I should of rented a bigger dumpster. We had a lot more stuff than thought.

I gutted an old house and needed several dumpsters for the debris removal. I wanted to go with the most local dumpster company. I found Next Day Dumpsters, and they met my needs and accommodated most of my requests. I ended up using about 5 dumpsters and I had no complaints whatsoever.

We renovated an old building and in addition to the construction debris we also had to get rid of furniture and other miscellaneous stuff. I was surprised that we went over the weight limit. Even though they went over that with me and what the extra charges would be I just expect it. Stuff weighs more than you think. I believe I went a ton over. As far as the dumpster company goes, they were fast and I had no problems.