At Rubbish Works, we'll take care of all your rubbish removal projects. We'll come to you, load up the junk, and haul it away - it's that simple. We recycle and donate a majority of the junk we haul.

Want to do the junk removal yourself? We also offer 20 cubic yard dumpsters for rent. Ask about discounts that are currently available.

At Rubbish Works, we'll take care of all your rubbish removal projects. We'll come to you, load up the junk, and haul it away - it's that simple. We recycle and donate a majority of the junk we haul.

Want to do the junk removal yourself? We also offer 20 cubic yard dumpsters for rent. Ask about discounts that are currently available.

We're a fully insured company that is dedicated to the customer and his or her needs. We'll work out a custom rubbish removal plan for you and save you some cash in the process.

When I called Rubbish Works to rent a dumpster from them, they were very responsive. I had called several other dumpster rental companies in my area, but they were the ones who had availability the soonest and with the most reasonable pricing. I didn’t experience any problems with them and thought that everything went very well.

I was cleaning out my house and I needed a 15 yard dumpster to complete the job. Rubbish Works took care of my dumpster needs as always. They ve always done a good job and this was no different either. They re pretty much on point with their delivery and pick up. Everything was absolutely good working with them.

I needed a 20 yard dumpster for some construction debris. Rubbish Works provided a competitive cost for their dumpster, and they’re the only contractor fast enough to deliver the dumpster to me. They delivered it on the agreed schedule as well as the pick up. The dumpster was in top condition. They were very professional as well all through out our transaction. I’d definitely use them again.

Rubbish Works arrived in a timely manner and I didn’t have any issues with it during the 3 days I had it. After I called them, they picked it up promptly. Since then, I’ve called them again for another project. They did an outstanding job, and I recommend them to everyone.

I needed to have an old, heavy 36-inch CRT television removed from the house. Rubbish Works of St. Louis did the removal for me. Their service was fine. They arrived on time and took the item from inside the house. They did a good job, and I will use them again if I need it.

When my father-in-law passed away, our family needed a 20 yard dumpster to remove household junk and collected debris from his house. I scheduled one from Rubbish Works of St. Louis and didn’t have any problems. They delivered the dumpster as scheduled, and the entire 7 days went by hassle-free. Their services worked out well for us, and I would highly recommend them.

Rubbish Works of St. Louis delivered a 20 yard dumpster to haul away household debris and some trash. The delivery came quickly, and there were no issues with the dumpster. They came and picked up the dumpster when I was done. They did a fine job.

I was disposing of an area rug, a couple of broken furniture pieces, and some random household items. Rubbish Works was hired for the job. I was very pleased with them. They were on time and they took everything I wanted removed from the garage. I would definitely use their service again. They did a good job for me.

Our company needed a concrete sign removed after it got hit by a sports car. Rubbish Works of St. Louis did an efficient job.They hauled the concrete sign out and made sure that they didn t leave anything behind.

I needed to remove a sofa, a loveseat and a recliner that I had neatly stacked up in my garage. I had Rubbish Works of St. Louis do the job for me. They came as scheduled, backed their truck up to my garage and hauled the items I needed removed. Before they left, they made sure to clean up before leaving. They did a good job and I will definitely use them again.

I needed an old piano removed from the house and Rubbish Works did the job for me. Everything went well. They came as scheduled and got right to moving the piano. They were very careful when moving it out of the house. I had no issues with the service I got from them.

I need to rent a 20 yard dumpster for a house clean out and renovation to remove old furniture and construction debris. I received good service from Rubbish Works.

I requested for the removal of a loveseat and sofa. The guys from Rubbish Works were fantastic. The job was done quickly and at a very reasonable price.

We ripped up the carpet in the basement and needed a dumpster for that, a headboard, foot board, railings, mattresses, box springs, and other miscellaneous stuff. The guys from Rubbish Works were very prompt. I got the 20 yard which I kept for 4 days. I was quite happy with their service.

We were moving and needed some small household junk and other items to be removed and disposed of. Rubbish Works came, got the junk, and left. The items were already out front by the garage, so it was quick and easy. It was a bit pricey, but I had no choice as we had to have it done immediately.

We tore down a shed in the backyard and needed the remaining wood hauled away. Rubbish Works said they would be here the next day, and they came right on time. There was enough wood to fill a small pick-up truck, and we had already packed it all together, so they just had to pick it up and haul it away. They did a wonderful job, worked fast, were efficient, and cleaned up afterwards. Also, they charged me exactly what they quoted over the phone. There were no hidden charges, and that s very important. They were very nice, I was very happy with their service, and I would recommend and use them again anytime I need anything done.

My mom was moving out and had over 20 years worth of stuff to cleanout. I called Rubbish Works and asked them for a 20 yard container. I wasn t at my mom s place when they delivered it, but I did find it was there when it was needed. They placed it exactly where we asked them to place it. We had the dumpster for 5 days and don t have any complaints about the service.

I cleaned out my basement and had a large projection TV, treadmill, a 30-inch TV, and some miscellaneous junk to throw out. Rubbish Works did the haul and did a professional job. I even left something in one of the items they hauled off and they gave it back, which I appreciated because I really didn t want to lose it. They did a good job, but I found it to be a bit pricey.

I got a 10 yard dumpster from Rubbish Works, which I had with me for 3 days. I did all the work, hauling everything out, but they came on time for pickup and I have no complaints.

I needed a sofa and a love seat hauled off. Rubbish Works - St. Louis MO did just fine. It was a simple pick up job but I appreciate that they were able to come here when they said they would and was able to haul out the items quickly.

I wanted some items hauled out from my home and the guys who came here from Rubbish Works - St. Louis MO were great! They were polite and very helpful. They were also able to finish the job in a timely manner.

I needed someone to haul away lot of hoarder junk for me. I was pleased with the guys who came here from Rubbish Works - St. Louis MO. They were very friendly and efficient. It took them a bit longer than I expected to haul everything out since I don t think they expected the amount of dirty junk that they needed to take care of but it s hardly their fault. All in all, I think they did a pretty good job.

I needed someone to haul away a gas grill, a bench and some other garage things. The service I got from Rubbish Works - St. Louis MO was perfect. The job was pretty simple and straightforward but they did everything professionally and I appreciate that.

I had a bunch of clutter around my house that I wanted hauled away. Such as, tree branches, bikes, patio cushions and, an old appliance. The guys at Rubbish Works did a good job. They arrived on time and had everything loaded in no time at all. No complaints.

Some bikes, tires and siding because of the hailstorm, and the entertainment center from my daughter s ex-boyfriend, were needed to be hauled off. All of the items were at the carport and backyard. I was here with my mom when Rubbish Works did the project. They were very good. My mom called them and they were here when they were supposed to. They were very pleasant to work with and have taken all the things they need to take.

There was a large crate that had to be taken out of the office. Rubbish Works picked the crate up. They were very pleasant to deal with. It was a great experience. I would certainly use them again.

I had my house renovated and had some items to be hauled out of the garage. Rubbish Works did a fantastic job. They were very friendly, helpful and they did an excellent job in cleaning up everything. I d use them again.

The project was a rental property clean out. I had to get rid of the stuff that the tenant have left. Rubbish Works was very good, they were prompt, efficient and did a very good job.

When I moved I had a lot of stuff left in my garage that I did not want to take with me, so I hired some garbage removal guys to come and bring me a dumpster. I just didn t want to deal with the headache of sorting all of it on my own. I contacted Rubbish Works and they were professional. They did exactly what I needed, my garage was cleaned out, and I was prepared for closing.

I m a maintenance supervisor for an apartment complex and I have a real issue with former tenants leaving furniture and things behind. I have an established relationship with Rubbish Works. I call em and they show up the next day to do the clean out. They have never let me down.

I needed to take out some appliances, including two fridges and a stove from a few foreclosed homes. Rubbish Works was wonderful, on time and I would recommend them to others.

I cleaned up the house and had a bunch of yard trash I needed hauled away. I was satisfied with Rubbish Works. They were very professional and straightforward. They came in, did the job and it was very easy.

I had some concrete and sheet rock debris that needed to be removed from my house. The guys over Rubbish works showed up 5 minutes early and managed to load the stuff I wanted to be removed without leaving any mess or any dirt in my garage. They did an awesome job and will definitely use them again.

I had a lot of stuff that needed to be removed and I needed a dumpster service. Rubbish Works did a great job and we were able to get a dumpster with a reasonable cost. 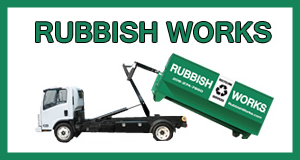