Team Clean and Haul launched its dumpster rental and junk removal service back in 2005 and since has become one of the area's leading waste haulers. Our focus on providing the customer superior service and affordable rates are the keys to our success.

We have dumpsters in all the most popular sizes ranging from compact 10 yarders to 40 yard construction dumpsters. If you don't feel like cleaning up the trash and debris yourself, our friendly

Team Clean and Haul launched its dumpster rental and junk removal service back in 2005 and since has become one of the area's leading waste haulers. Our focus on providing the customer superior service and affordable rates are the keys to our success.

We have dumpsters in all the most popular sizes ranging from compact 10 yarders to 40 yard construction dumpsters. If you don't feel like cleaning up the trash and debris yourself, our friendly staff will do it for you. Our junk removal service does all the heavy lifting for you.

I called Team Clean and Haul Corporation when I needed a dumpster. Susanna was fantastic. She set me up with same-day delivery and haul away. Their customer service was outstanding. Four guys showed up and wow did they work well together. They hauled everything in a quick manner and were so friendly and helpful. I would definitely use them again. They were excellent.

Team Clean and Haul Corporation was responsive with their estimate and punctual with delivery time and pick up. They were very nice to work with and the drivers were always helpful and careful with our property.

I was doing some home remodeling and needed a dumpster for the demolition process. I was able to get the correct size for my project, and the dumpster was delivered and removed on time as specified. Everything was done online in less than 10 minutes, too. We will definitely use them for my next project.

I rented a dumpster from Team Clean and Haul Corporation for a remodel I was doing at my house. The gentleman that dropped off the dumpster was very nice, professional, and on time. When I was done with the dumpster, it was picked up with no issues, and no damage was done to the concrete. I was pleasantly surprised, considering I deal with contractors constantly. Their service was great overall.

Their team showed up within the scheduled time and preformed the task very quickly. They were very professional and cleaned up nicely when the job was finished.

I needed to remove some junk from the house after a house cleanup. I decided to rent a dumpster from Team Clean and Haul. I have no complaints with the service I got from them. They were timely and got me the right size dumpster for the project. Overall, they did a really good job.

We chose Team Clean and Haul for our 20 yard dumpster rental. They delivered it on time, and they were very accommodating. We were suppose to only have it for 14 days but because of some unforeseen delays, they allowed us to extend it to 24. They did a pretty good job and I was very happy with them.

I needed a dumpster for almost 20 cubic yards of dirt, wood, wilted plants and plant trimmings. I got the dumpster from Team Clean and Haul. Their service was lousy. First they recommended that I get a 20 yarder for my project. And when I called them to pick it up, they came and told me that they can t haul it because there was too much dirt in it. They were never clear in the contract of how much dirt I can put in it. Their supervisor eventually came and picked up the dumpster but not without unloading at least 4 ½ tons of dirt right in front of my street. I had to get another dumpster and shovel that dirt back into the new bin. I am not going to get any service from them and I will never recommend them.

Team Clean and Haul took care of our house clean out in Phoenix, AZ. They hauled some mattresses, old TV s, night stands, desk, dresser and entertainment center. I d definitely recommend them.

I needed a couple of 10 yard dumpsters for plywood and other construction debris from a renovation.I called a few companies and Team Clean and Haul s pricing was half that of the others . Very reasonable. They also didn t have as many stipulations and allowed you to use a debit card for payment. I kept each dumpster for 14 days and had no problems with them. I will be renting another one from them soon.

We had some branches to get rid of, from trees that haven t been pruned for 8-9 years. There was also some old wood, bricks, and garbage left over from a renter. I called Team Clean and Haul at 5:00pm to make a request for a 10 yard container. They were about ready to close, but they still took care of what I needed and made sure I got my order in. That was impressive. I wanted the dumpster there the next morning, but they said they couldn t guarantee it. They did show up much sooner than I thought, which was around noon. This saved me, since I needed to rush to the airport that evening.

While working on a concrete patio demolition, we called up Team Clean and Haul for a dumpster. We asked them for a 10 yard dumpster but they only had a 20 yard available, so they delivered that to us instead. The guy explained everything to me, including the limits of concrete we could put in the dumpster. He was really thorough and we were very happy with their customer service. We had asked to keep the dumpster for two weeks, but we were done with it after three days so we called for pick-up then. They did a good job.

Hired Team Clean & Haul to pickup a 6-piece sectional and recliner, and they did great. They were very professional - from the people on the phone to those who came over. They were efficient, polite, clean, and just very good. We have no complaints whatsoever as it was a good experience all around. I give them top rating, and highly recommend them.

4.0
Review by Sandra in Peoria, AZ

I needed someone to remove one sectional couch and Team Clean & Haul Corporation was able to do it just fine. I had no complaints.

5.0
Review by Dorothy in Scottsdale, AZ

Team Clean & Haul did a great job getting rid of my old sofa and bed. The whole job was fast. They were in and out in no time.

We hired Team Clean and Haul to take away a couch and a bed we didn t want anymore. They were very easy to talk to and they were able to finish the job without any glitches.

I needed the fire pit hauled out and some other excess items left behind by an old tenant. Although I wasn t actually there when the project was done, I do know that they did everything that they were supposed to. They cleaned up very well after the project and they also charged reasonably for it.

I had some 20 year-old furniture that I wanted to get rid of. There was a couch, chair, fake tree, two dressers, and some other miscellaneous items. It was a bit difficult to get ahold of Team Clean & Haul over the phone, and when I did get through, I could hear kids in the background; it seemed like I called a home instead of a company. Other than that, the service was satisfactory. I wasn t there during the hauling, but when I got home I saw that everything had been taken away and the place had been left clean. I got a good deal too and paid over the phone, via credit card.

We needed some weights to be hauled from our home. Team Clean & Haul came in, got the weights, and left. It was quick and they did a good job.

I was clearing out an old storage unit that I was holding on to for years and decided to haul away the old contents, such as tools, scrap metal, and old ceramics. It all came out to about 10 contractor size bags and filled up about half the truck. Team Clean and Haul Corporation did a fine job for us, and we would use them again for our house when the time is right. Good company.

The cleanup involved some general household stuff that we needed taken away, like an old projector TV, some tables, mattresses and other small household junk. The Team Clean and Haul Corporation guys were extremely helpful, very courteous and quick. They got the job done really well. I was very happy with the results.

There were some miscellaneous (all wood) construction debris that nobody would want. It was from Habitat for Humanity. I had it piled up on the side of the house. It filled up one pickup truck. Team Clean and Haul Corporation did the hauling. I only have one phrase to describe the entire experience and that is top-notch . I highly recommend the company and their services.

I needed some items hauled out of a storage locker. Team Clean & Haul Corporation was great. They were right on time, and did the job quickly. The crew was polite and courteous. We will definitely use their services again.

I had some cardboard boxes from moving I needed removed from the backyard. Everything went just fine with Team Clean & Haul Corporation. It was a 1 man job; he showed up and took everything we needed to have him take, and the area was left clean and in good shape. It was handled quite satisfactory.

We were combining 2 homes, so we had a lot of stuff that we needed to get rid of. They did a good job, they explained everything and they did everything according to plan without any issues. They also did not leave any mess.

I had shrubs and other yard waste to be removed. Everything went well; I have nothing bad to say about Team Clean & Haul. I would rank them all the way to the top.

My dumpster experience went fine. The process was easy. In fact, we were able to get rid of stuff we didn t think would fit in the dumpster.

Everything turned out just as I would have hoped. Team Clean was good. I had no worries. 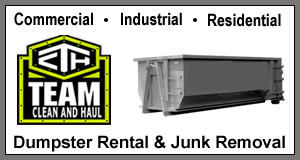