At United Services it's our job to help you 'get rid of stuff.' We are the cleanup experts, serving Illinois residents and businesses since 1972. We're a family-owned and operated company that treats customers with respect, and your satisfaction is always guaranteed.

Our inventory of roll-off containers is vast. We offer 10 to 40 yard dumpsters to finish any cleanup with ease. If you'd like us to do the cleaning for you, we also offer junk

At United Services it's our job to help you 'get rid of stuff.' We are the cleanup experts, serving Illinois residents and businesses since 1972. We're a family-owned and operated company that treats customers with respect, and your satisfaction is always guaranteed.

Our inventory of roll-off containers is vast. We offer 10 to 40 yard dumpsters to finish any cleanup with ease. If you'd like us to do the cleaning for you, we also offer junk removal services.

Let us help with your next residential, commercial or industrial cleanup or clean-out project. 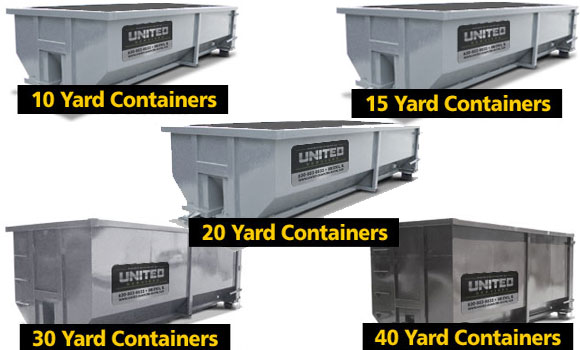 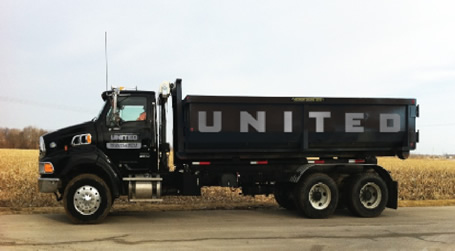 We had used United a couple of times already and were happy with them. They delivered the 20 yarder promptly for a 14-day rental, and they called me tonight to remind me that they re picking it up tomorrow, so they re definitely an organized company.

We were getting rid of household junk from the garage and needed a 30 yard container for everything. We were happy with United, but the guy didn t realize that he positioned it too close to the house, so we couldn t get the garage door open. I think he was a little irked about this, but he did come back in the middle of the night to reposition it.

I rented a 10 yarder for construction debris. United did a really good job. There was confusion in terms of size; I originally asked for a 10 yard container but realized I would need a bigger one, so I called them back to upgrade. She was out of the office when I called, but said she would take a note of it as soon as she got to the office. I guess she forgot to do that and they brought over the 10 yarder instead. I was right; it was too small. They did all kinds of stuff to make up for it, though. They got rid of the delivery fee and brought another dumpster with no charge. They really did a great job on that and I would use them again.

We got a 20 yard container from United to get rid of some household junk left behind by some tenants who have moved out. They came on time, and the guys were friendly and professional. Everything was good.

We were cleaning out the house and yard of a lot of junk. We had old furniture, clothing, storage stuff, pieces of wood, and some other debris from old projects we had done. We filled up the 20 yard dumpster to the top. The dumpster was clean and in perfect condition, and they were courteous when I called. I really have no complaints except for when it was time for pick up. Rental was for 14 days but we wanted it picked up a little bit earlier. On paper, it said they were gonna pick it up on the 27th, but when I got home it was still there. I called to find out what s going on and they asked if I had called to request for pick up. I didn t know I needed to call since it was on paper. Anyway, she said okay, they ll try to put it on for pick up the next day, but it took yet another day for them to finally get it. It didn t really create too many problems other than the fact that my husband drives a big truck and couldn t park it in the driveway while the dumpster was there.

I needed a 10 yard dumpster for some wood, tiles, and other construction debris. United delivered on time and I kept the container for a week. Communication and service was fine.

We had torn down a cedar fence and a deck and decided to go with a 30-yard roll off dumpster to get rid of the leftovers. United Services let us keep it for 8 days. The dumpster got here a little later than I expected, but I understand they were busy since it was a holiday weekend. So, it was fine and wasn t an issue.

We just moved into a new house and the previous owner left a lot of junk in it (thanks!). There was some old flooring, cabinets, clothes, and lots of other junk. We got a 30 yard can from United Services, and everything went smoothly. They came on time and we kept it with us for three days.

We rented a 15-yard bin for about $320 from United, and we re pretty happy with their services. They were on time, picked up after 3 days (on schedule), and the service was good.

I was getting rid of a couple old couches. I definitely enjoyed the service from United Services. They did a fine job.

I had a 20x25ft roof that I was having replaced and needed a dumpster for the shingles I was disposing of. United Services rented out a 15-yard dumpster to me for 3 days. They were easy to talk to and delivered on time. Everything went real smooth. They re excellent.

I was getting rid of a king size bed. Mattress,frame and box spring. Everything went fine with United Services. It was quick and easy and I m satisfied.

I was getting rid of a sofa, a chair and an ottoman. United Services was excellent! They were personable and efficient and the communication was great. I am very pleased with them.

It was a couch removal job. I have decided to hire United Services, and I really have no issue or complaints with this company. They picked up on time, even called me few times to give me notice, and the guys were fast and friendly.

We needed to hauled away a couch and some bags of debris. United Service did an excellent job. They were prompt and I m just happy with their service.

I needed a dumpster rental for a home remodel project. I got the service from United Services and they were friendly and nice to deal with. They delivered and picked up on time. I don t have any complaints at all. I thought they did a great job.

I did some remodeling on my bedroom and wanted my bedroom set removed from my apartment. United Services guys were fast and showed up on time. They were careful not to damage the walls when removing the box spring. 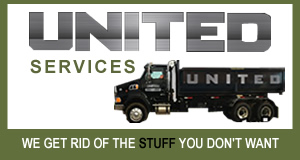