American Dumpster Rental is proud to have been servicing Atlanta with competitively priced dumpsters for over 12 years. We make renting a dumpster quick and easy with our low profile dumpsters and doors on the back ends to make loading much simpler. We are committed to providing homeowners and business owners with the highest quality dumpster rental. If you are in need of multiple dumpsters, we provide discounts!  Call for a price quote today with American Dumpster Rental. Dumpsters. Who we are. What we do.

American Dumpster RentalWrite a Review
5.0
Review by David A. in Willisburg, KY

I was tearing down an old deck, so I had a lot of wood to get rid of. I also had two old console TVs and some cardboard boxes in my garage that needed to be taken away. I got a 15-yard dumpster from American Dumpster Rental and I was very pleased with them. Every time I called, they were real quick to give me answers; they were very cooperative, cordial, and polite. On the day itself, the guys came on time and everything went really well. I wanted to have the dumpster for ten days, but it spanned the Labor Day weekend, which was a holiday, and I asked them if it would cost me extra because of that. They said it was no problem, as long as they could come pick it up the very next day. I still have some more junk and am considering getting a smaller dumpster from them again.

We had a house fire and needed three bedrooms to be cleared of the debris as soon as possible. We got a 12-yard dumpster from American Dumpster Rental, and they did a really great job. We called late afternoon, but they got out there that very same day. The service was great. They were really present and very helpful. At that time, we were living at a hotel, but they made sure to provide us with papers, like the billing information, which we needed for insurance purposes. I hope we never go through this again, but if ever we do need to rent out a dumpster for any other reason, we would use them again. We also would recommend them to other people.

I am a property owner and we had to clean out a garage full of household junk left by one of our previous renters. American Dumpster Rental gave us a pretty high quotation for a 30-yard dumpster, but I went with them because they promised to get the dumpster there that very same day. What happened though, is that it arrived a day later. This may not sound like a big deal, but when you have a crew that you re paying by the hour, then yes, it is a big deal. Other than the delay in getting the dumpster there, they also picked it up a couple of weeks late. To be honest, I m not even sure if they already picked it up. They promised to do this last Friday, September 20, but I haven t checked to see if they really did finally get it. Prior to this, I had sent them a few emails already, which I know they have read, and yet the pick-up was still two weeks delayed. This has cost me money, there were no apologies, discounts, or any show of remorse on their part at all. I would never use them again. 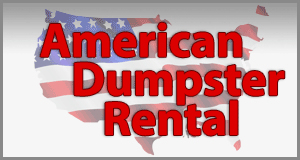