At VR's Hauling, we give every customer the attention he or she deserves and always ensure they're satisfied with our top-quality dumpster rental and junk removal services. If you are in need of a dumpster, we offer compact 11-yard roll-off containers, as well as larger 20 and 30 yarders. We're a local family owned and operated company that is able to offer more affordable rates compared to the 'big guys'. We look forward to earning your business.

I was working on a project and needed a 21 yard dumpster for the construction debris. DR s Dumpsters took care of my dumpster needs. They were prompt and efficient with their service. Everything was done according to schedule from delivery to pick up!

When I needed a 20 yard dumpster, DR s Dumpsters was the company I chose. They came on time and set it up for me. I have nothing to complain about. The entire six days, there were no issues. I’d definitely use them again and was happy with a job well done.

We needed a dumpster during an estate clean up we were doing, and got one from DR s Dumpsters. Their team showed up on time and they picked it up when they said they would. I didn’t have any issues with them at all.

I did a house clean up and needed an 11 yard dumpster to haul away the resulting debris and trash. I went with DR s Dumpsters for the dumpster I needed. They came on time and gave me a clean container to use. I had it for 14 days and didn t have any issues with it. Overall, VR s provided good service. They were recommended to me and have a good reputation. I would recommend them, too.

VR s Hauling was hired to remove a shed for us. I was definitely happy with the service they provided. They have professional people and are good in their craft.

I needed a play house and some flower pots removed from my backyard. I had VR s Hauling do the job for me. They came in on time. Although I had the playhouse dismantled, they had to walk through the backyard and haul every piece to their truck. I had a few more items that I needed removed and they took care of it without making a fuss. They were extremely nice and very professional. I was very satisfied with the service and I highly recommend them. They did an excellent job.

I rented a 20 yard dumpster from DR s Dumpsters and it all worked out.

We were cleaning out the house, so we needed to take out some old furniture and other household junk. We were happy with everything, it was all done fast and they were very professional.

I needed some junk and construction debris removed. I called VR s Hauling for the job. The service was good and it was convenient for me.

I rented out 4-5 dumpsters from DR s Dumpsters for some dirt and yard debris. It was part of a landscaping job. They would only let me fill it up halfway because of the weight of the dirt, so they d bring one in, I would fill it up, and they would replace it with a new one every two days. I kept the last one for a week though. The guys were friendly and the service was awesome.

We get a lot of cat food shipments and the boxes tend to pile up, so we have to get a hauling done every now and then. We went with VR and they were very nice people. They showed up when they said they would, and charged exactly what they quoted us over the phone. We were pleased with their service, so we called them again for another job. 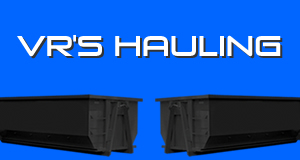