Recycling 101: Learn How to Recycle More and Throw Out Less

Reports show that approximately $11.4 billion worth of recyclables enter U.S. landfills every year.

While there are no national mandates requiring individuals to recycle, the EPA (Environmental Protection Agency) announced, in November 2020, its ambitious plan to increase American recycling efforts to 50% by 2030.

The news release quotes EPA Office of Land and Emergency Management assistant administrator Peter Wright as saying, 'Without national leadership on this issue, recycling has lingered in the low 30% range for the last twenty years. The economic and environmental benefits from recycling are clear, and we’ve made a lot of progress, but much more needs to be done to obtain the benefits of increasing the national recycling rate to 50 percent by 2030.'

With countries like Germany, South Korea, Sweden, Austria, and Switzerland recycling municipal waste above the 50% mark, it's natural to wonder how places like the United States and Canada have failed to keep up.

In this article, we'll discuss...

Contact a recycling junk removal company in your area

All of the high-volume recycling countries have something in common that is driving these positive numbers: legislation.

The success of recycling efforts in other countries can be credited to government policies that encourage it.

As the numbers have shown, good funding and financial incentives encourage local and municipal authorities to find solutions to achieve their recycling performance targets.

In 2018 alone, an estimated 139 million TONS of recyclable material was sent to U.S. landfills.

Only one type of recyclable material is recycled in America more than it is thrown out, and that's paper and paperboard.

Even then, there are still millions of tons of paper entering our landfill system.

Americans do the worst job at recycling plastic, which is arguably the most important material to recycle.

Almost every type of plastic is made from planet-warming fuels like gas, oil, and even sometimes coal.

Breaking down plastic can take hundreds, even thousands, of years, which is why recycling is so important.

To top it off, plastic doesn't just affect the environment, it seeps its way into every aspect of the food chain, from tiny plankton to the fish we eat, causing exposure to toxins for plants, animals, and humans.

An article published in the L.A. Times takes a look at the problem from an energy standpoint.

It states the U.S. could save about $12 billion per year in energy costs by increasing the national recycling rate.

This is due to the fact that it requires less energy to recycle materials into new products than it does to make new products from virgin materials.

With all of this information at our fingertips, it's hard to understand why efforts to increase our national recycling hasn't been more successful.

More and more large companies have made the switch to recycled packaging to help curb their carbon footprint.

While positive change can take time, the world doesn't have time to wait.

Some of these statistics are alarming, but it’s important to point out what’s being done at municipal landfills across the country to alleviate part of the problem.

Additionally, the EPA states there are a total of 86 landfills in the U.S. utilizing waste-to-energy technology to turn trash into energy by burning waste.

The resulting smoke is filtered to ensure it doesn’t harm the environment, and the resulting ash is hauled off to the landfill.

The trash incineration process not only produces 2,720 megawatts of power nationwide each year, but it significantly reduces the amount of waste entering landfills.

That said, recycling efforts in the U.S. can certainly be improved.

This is not an issue that the government or big business is solely responsible for; it starts with individuals.

The average American produces more than 4.5 lbs. of trash per day, 80% of which is recyclable.

As individuals, we can help improve the state of recycling in the U.S. one empty can at a time.

As individuals, there are plenty of ways to help your community's recycling efforts.

Separating your trash is the most common and easiest way to minimize your carbon footprint.

If you're lucky enough to live in an area that offers curbside recycling, the process is similar to taking out your trash.

Your recyclable trash, separate and free from all food waste, can be gathered in your recycling bin and taken out to the curb on your area's scheduled collection days.

Some states, like Michigan, Hawaii, Iowa, and California, have programs in place where consumers are charged a small deposit fee per plastic bottle or aluminum can purchased, and they'll get that deposit fee back only if they return these cans and bottles for recycling.

If you live in an area that doesn't offer curbside recycling or a soda can/bottle buy back program, your recycling efforts might be more involved but certainly not impossible.

You can search online for recycling centers that accept outside recyclables.

Additionally, composting your food and yard waste is a great way to minimize your impact on the environment.

Organic waste is biodegradable and comes from either a plant or animal.

Any food or yard waste falls into this category and will decompose naturally in oxygen-rich conditions.

This process is called composting and the result of composting produces humus which is full of nutrients that can then be used to fertilize other growing plants.

Composting not only minimizes one's environmental impact but is a great way to maintain your small (or large!) home garden. 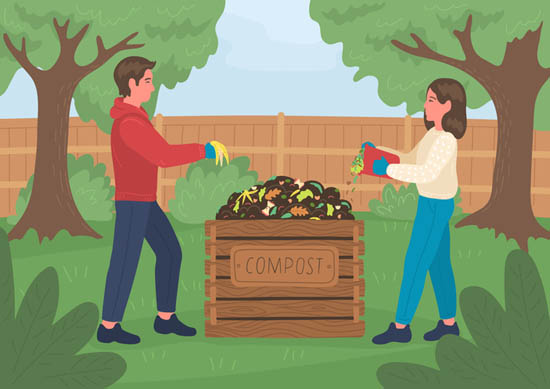 Many junk removal service providers commit to recycling 60-70% of all waste they remove on their customers' behalf.

Hometown makes it easy to find service providers in your area that will be able to explain their disposal process in detail at your request.

Some junk removal companies will even provide you with a receipt for your items that they donate which allows you write off the amount donated on your taxes.

For people who go the DIY route and rent a dumpster to throw out their junk on their own, clean loading a dumpster is also a great way to make recycling easier.

Clean loading a dumpster simply means that you load a dumpster with the same type of recyclable material.

For demolition or home improvement projects, you might be able to clean load your dumpster with only asphalt or only wood.

This allows for an easy dump at a recycling center rather than mixing in other waste, like food or textiles, in with your clean loaded dumpster.

Recycling in today's world is much easier than it was in the past and with experienced junk removal services available to guide you with local resources, there's no reason to be intimidated at the process.

Find a recycling junk removal company near you