Consequences of Illegal Dumping in America

According to Let’s Do It!, a global organization helping to clean up illegal dump sites, there is approximately 100 million tons of illegal garbage lying around the world. It’s a problem that affects all parts of the United States, particularly big cities and rural areas.

Illegal dumping affects the environment, public health, and increases your taxes. Although the problem may be caused by relatively few people, it affects everyone. Luckily, cities across the country have stepped up enforcement and have raised awareness about the problem in recent years.

Today, technology makes it easier than ever to report illegal dumping sites to local authorities, and stiffer penalties have people thinking twice before tossing an old mattress or scrap tires on the side of the road. The information below describes a quick overview of the problem, the many consequences involved and solutions to the issue.

It can be a felony offense

Depending on your local and state regulations, illegal dumping is a misdemeanor or felony punishable by jail time in some cases. Fines start at $50 for minor offenses and can reach up to thousands of dollars in some situations.

Some states are really cracking down on the problem and doling out tougher penalties to offenders. New Jersey, for instance, implemented a new plan in 2014 that will punish illegal dumpers with up to $50,000 fines, forfeiture of vehicles involved in the dumping, and possible jail time.

New Jersey’s “Don’t Waste Our Open Space” campaign consists of a statewide crackdown of illegal dumping, involving the use of hidden cameras strategically positioned at common dump sites and public involvement to ID offenders when necessary. Learn more about this initiative here.

Is there a difference between littering and illegal dumping?

In most states, yes. Litter is generally defined as a small quantity of waste disposed of illegally (e.g., throwing a candy wrapper out a car window). Illegal dumping is generally recognized as disposing of a larger volume or weight of waste/debris (e.g., dumping furniture, tires, mattresses, or construction debris).

Littering is considered a minor offense in most cases, but illegal dumping can lead to felony charges, hefty fines, and jail time. 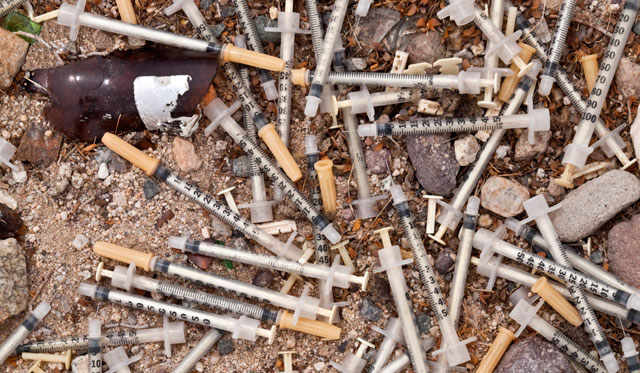 Other adverse health risks come into play when dangerous chemicals, like automobile fluids, household cleaners, industrial wastes, appliances containing chemicals (e.g. refrigerators), and tires, are illegally disposed of. The chemicals leach into the soil and area waterways. This is the same soil we use to grow crops and the same water we drink.

A third negative consequence common to illegal dumping sites is the ideal conditions these places make for rodents, vermin, and mosquitoes. Disease-carrying rodents love to call these places home, and this poses a major health hazard to anyone living nearby.

“Out of sight, out of mind” is often the mindset of people who dump wastes illegally, but that’s far from reality. Cleaning up, monitoring, and enforcing instances of illegal dumping cost taxpayers a significant amount of money each year. The EPA mentions that some urban areas in the U.S. spend “several million dollars per year on cleanup, hauling, and disposal” of illegally dumped wastes.

It’s a problem in every state. For example, in Pennsylvania, it costs taxpayers about $10.1 million per year to clean up roadside litter and $835 per ton to clean up an illegal dump site, according to the Pennsylvania Department of Transportation.

Whether you realize it or not, “midnight dumping” as it’s sometimes called affects you financially, even when you’re not the offender. 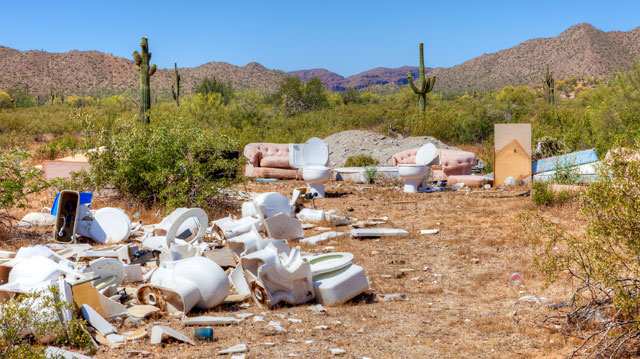 Aside from being an eyesore, illegal dumping wreaks havoc on the environment. As previously mentioned, chemicals from wastes and certain appliances can leach into soil and local waterways causing damage to plants, wildlife, and water quality.

Other issues include increased risk of flooding and forest fires. Wastes dumped in waterways can block the natural flow of water and lead to flooding issues over time. Illegal dumps are also notoriously susceptible to fire caused spontaneously or by arson. Fire destroys area forests and homes, causing both an environmental and financial disaster.

According to Project Green Sweep of the Ohio EPA, old appliances can release chlorofluorocarbon (CFC) into the air, which is damaging to the earth’s ozone layer.

What can I do about the problem?

If you have a smartphone, it’s easy to help. An app like TrashOut (which we first introduced here) makes it easy to report illegal dump sites. You simply fire up the app, take a picture of the illegally dumped waste, let your phone’s GPS grab the location, and submit it. TrashOut reports it to the local authorities and will even keep you in the loop as to what actions are taken to clean up the area.

Some cities have dedicated departments to handle unauthorized dumping of wastes. Check by going to your local government website, or by calling the environmental division of your local government. If your city uses the 3-1-1 hotline program, it can often be used to report dump sites. See a list of cities that utilize the 3-1-1 non-emergency municipal service line.

Some cities offer rewards for information leading to the conviction of illegal dumpers. According to CalRecycle, the city of Sacramento and Shasta County offer $250 rewards, and San Bernardino County offers rewards of up to $1,000 for tips leading to a conviction.

The correct ways to dispose of bulky wastes and large volumes of waste/debris can be found below.

Learn more about dumpster sizes and what factors affect pricing. Tip: Make sure you get a good deal and see what others are paying for 10 and 20 yard dumpsters in your area.

Do your part and help clean up your neighborhood. There are over 300 million people in the U.S. and each person generates an average of more than 4 lbs. of garbage per day. That’s a whole lot of waste to deal with!

It’s becoming increasingly important to make sure waste is put in the proper place. It starts with awareness. If you found this article helpful, please share it with others to help spread the word about the damaging effects of illegal dumping and what we can do to stop it. 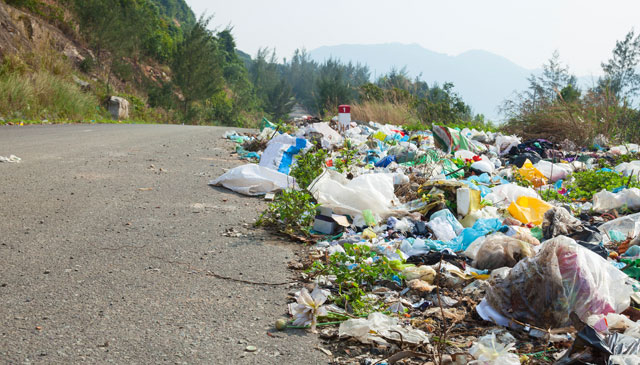 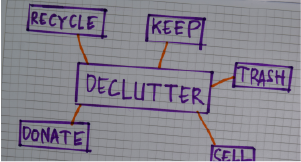 Declutter and Organize Your Garage in 5 Simple Steps

Bagster vs Dumpster: Buy a Dumpster Bag or Rent a Small Dumpster?